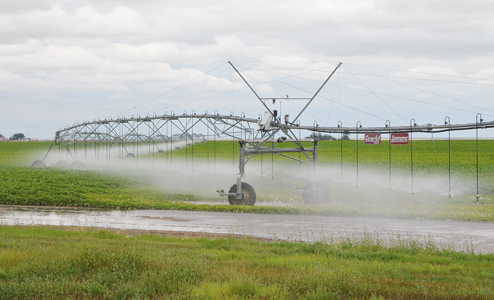 Discussion around a local farmer’s desire to bring irrigation to his property has led to another delay.

With MBJ Farms back in Municipal District of Taber council chambers after first attending the June 25 meeting, council once again discussed the request to place an irrigation pipeline in M.D. right of way at their Nov. 26 meeting.

MBJ Farms requested to install and operate an irrigation pipeline within municipal road allowance in early January but was denied by M.D. administration as per Municipal Policy and Bylaw 1806.

Since then, a request from St. Mary River Irrigation District and a notification letter from MBJ Farms to Taber-Warner MLA Grant Hunter had been received.

This pipeline would be owned and operated by SMRID and will be engineered and installed to district standards.

In the letter addressed to Hunter, MBJ Farms alluded to barriers presented to installing the pipeline.

“I write today to ask for assistance with a project aligned with the broader provincial initiatives around irrigation expansion and diversification of agriculture. It is currently running into problems regarding bureaucratic barriers and vested interests,” stated the letter. “The problem that MBJ Farms Ltd is having is being able to execute those purchased SMRID water rights. For a year and a half, the landowners to the north have blocked the rights to access the water sources needed to satisfy the project. MBJ Farms Ltd has tried multiple times to satisfy the landowner concerns through providing a market evaluation and offer compensation at our own expense.”

The letter also continued by explaining how MBJ Farms has proceeded forward with the request.

During council’s public engagement process, Duane Leth, who owns land directly north of MBJ Farms, stated his issues with the process so far.

“I’d like to clarify some statements Marty (Jespersen of MBJ Farms) made to the MLA Grant Hunter and The Taber Times that was printed on July 10, 2019. We farm directly north from the Jespersen’s and he mentioned landowners to the north blocked water needed for his irrigation project. Marty has met with me one time to ask us to consider running a water pipeline through our land. At that time, he told me they were looking to put up one or two pivots. He asked me to think about it and get back to him.. When I replied, I never said no to the pipeline. I told him it would be best to wait until the drainage project (Township 8 Range 16 project), which everyone knows about in this room, was completed and successfully working,” he explained. “Getting back to his letter, he stated they hired third party land companies to secure this pipeline and would compensate landowners accordingly. We have never received anything from a third party. Marty also states the M.D. of Taber has realized there is a drainage problem in the nearby area. He says nearby, when in fact Section 22 is one of the sections they are wanting to put four pivots on and is in the drainage project boundaries. He also mentions a water co-op, this is the first time I have heard of this idea. He states it satisfies public interest. Just wondering if the infrastructure they are wanting to build is going to be big enough to accommodate all of the public interest in that area.”

Within SMRID’s letter of request to the M.D., it states ‘Attempts were made to acquire an easement on private property to the east of the M.D. road allowance and utility right of way but negotiations were unsuccessful,’ and ‘An overlapping pipeline easement through the M.D.’s right of way would be approximately eight acres.

“I’m just here to support SMRID”s application for the pipeline,” said Jespersen when afforded the chance to address council.

Another resident in the nearby vicinity expressed similar concerns.

“I’m not part of a hostile group blocking the request for a pipeline for irrigation. What I do want to make clear is that my thought process comes from rational and reasonable thinking. I am the court-appointed trustee for my mother Elizabeth Hirch so it is my role to make sound financial decisions on her behalf and in her best interest and that includes protecting her assets,” said Brenda Renner. “I did write a letter to SMRID asking for them to pause on the approval for the acres for irrigation for MBJ Farms and my concerns were two-fold. The first being the drainage project, it’s a substantial financial investment. There has been considerable time the M.D. invested in the project and it’s a long-standing drainage issue. All of the landowners in that area stand to benefit from this project. I think it is reasonable to say ‘can we wait until the project is done, ensure it is operating the way it should, ensure the proper drainage is in place before we look at other factors like adding more water from irrigation?’ The other factor of concern is Section 24, the north half of that section is owned by my mother.”

One of the biggest issues Renner brought forward was described as an erosion problem in Section 24 stemming from a non-compliance issue located on Section 23.

“Alberta Environment has requested a plan to address the non-compliance issue. The plan was due at the beginning of November and to my knowledge, the plan has not yet been submitted. The non-compliance issue is a dugout which is positioned in quite a way that it is preventing water to follow through the normal and natural flow south. It is diverting water east on to Section 24, contributing to some of that erosion,” she explained. “I’ve talked to Marty twice and have stated I am not saying no, I am saying let’s pause and make sure the proper drainage is in place.”

She also expressed some problems with the letter sent to Hunter.

“I have read the letter to the MLA and there are a number of statements in that letter that are not accurate and there are several details that have been omitted.”

“I just have to caution the word not-compliant. There is an open investigation right now with Alberta Environment that is being dealt with,” responded Jespersen.

With both residents imploring MBJ Farms to wait until the drainage project was complete, council asked administration on an update where it was at.

“The Township 8 Range 16 project, the Water Act application is in for Alberta Environment and they are reviewing it. We still aim to have construction completed in the 2020 year,” answered Craig Pittman, director of infrastructure.

Considering council had not allowed any other pipelines in M.D. right of ways in the past, they explained why it was unlikely this project would be an exception.

“I think that our answer is going to be the same, that we can’t put it in the ditch,” stated Reeve Merrill Harris. “This really isn’t our battle to fight here and I think as far as the M.D. is concerned, we need another motion, but the recommendation is the same and that we don’t allow this pipeline in our right of way. Unless council has changed their mind, you guys will have to figure out where you go from here because it is not on M.D. land.”

With one of the parties not in council chambers to explain the request, some on council felt it best to include them before making any decision.

“The one question I have is to SMRID and they are not here to ask so whether we can table it to ask them, I’m not sure. As an irrigation district, they must have felt there was merit in this project to bring forward to us. The completion of the drainage project is my first priority but I also would like clarification from SMRID,” said Coun. Tamara Miyanaga.

While council wasn’t against getting more explanation to the request, it was also pointed out their answer would likely be the same.

“We need to be mindful though that we haven’t allowed any pipelines in our right of ways to begin with. Going back to what Brian said, if SMRID or irrigation districts have the ability to use their means to take care of issues, why do they want it through our right of way?” asked Crowson. “Regardless of their answer, I think our answer would probably be the same, would it not?”

A motion was carried for the M.D. of Taber and SMRID committee to meet and discuss the issue by a 4-3 vote.