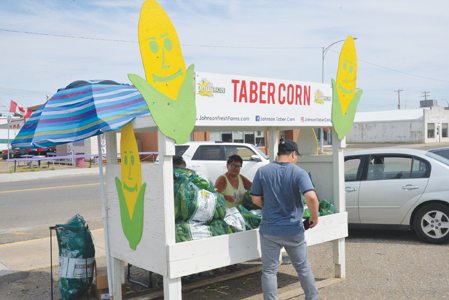 Putting the bad memories of a year ago behind them, local Taber corn growers opened their season in southern Alberta on Thursday and saw brisk business throughout the day.

“People are swarming in and scooping it up, which is good because we have a lot of corn to sell this year,” said Joe Johnson, owner of Johnson Fresh Farms, who opened four stands in Lethbridge last week to sell the sweet summer treat. Johnson said he has about 20 stands opened across southern Alberta altogether to capitalize on high consumer demand and good yields.

“We had a good crop this year,” he said. “We ran into a little bit of a hiccup with a hailstorm back in June, but it only affected a small percentage of our acres. Everything else that wasn’t hit is looking pretty good.”

Johnson, along with many other Taber corn producers, was almost completely wiped out last year when a devastating early August hailstorm struck the Taber and Barnwell areas. He was hoping for at least another month of good weather to finish up this year strong.

“After last year’s mulligan, it has been a long time coming,” he said.

“Hopefully, it will be a good six weeks of weather and we should be set,” added Johnson.

And growers like Johnson weren’t the only ones excited about the start of the Taber corn season.

Stands across the region saw steady traffic last week as people lined up to get their first helping of Taber corn, their first in two years in some cases.

One eager customer, Bob Fay, was able to get a much-anticipated bag of sweet cob goodness at a Johnson Fresh Farms stand on Mayor Magrath Drive near the Movie Mill.

“I always get Taber corn, you betcha,” he said with a big smile. “It’s just good quality corn. It’s sweet, good corn. I heard (the season) was opening up today and I heard they were coming out. So I was keeping my eyes open, and this is the first stand I saw; so I thought I would pick some up.”