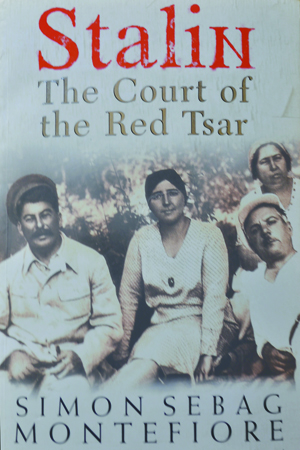 When contemplating the most reprehensible leaders in history, Soviet dictator Josef Stalin has to rate high on any list.

A Georgian peasant who rose to command the Soviet Empire as absolute ruler for more than three decades, and who has been accused of being the central figure behind the murder of more than 20 million of his own countrymen, much about Stalin is still mostly an enigmatic mystery, thanks greatly to the selective history of the Soviet state — which tends to leave out much if anything critical of Soviet leadership.

A pathologically paranoid and vindictive man, Stalin never forgot a slight by others, which he often repaid with blood, while never forgetting the adage that revenge is a dish best served cold — taking his vengeance on his political enemies and associates sometimes decades later.

Many historical works have been written about Stalin himself, about his rule, the Great Terror, political assassinations and show trials, and all of the petty miseries that made up life under the Soviet Union in the mid-20th century.

While much of this work has been comprehensive in scope, very little has focused on the true character of the man, his interactions with his inner circle, the families of the Communist elite, and Stalin’s own family.

This shortcoming was largely due to the lack of information on the subject, and lack of access to Soviet-era archives that remained sealed to Western scholars throughout the Soviet period in Russia.

Following the fall of the Soviet Union in 1991, this was all about to change.

Scholars today have access to a wealth of archival information that was never available to historians in the 1970s and 1980s, who were forced to speculate on motivations for various acts. Pouring over lost documents and archival information inside Russia in the post-Soviet period, British journalist and historian Simon Sebag Montefiore chose to focus on one of the more untold stories with regard to Stalin’s reign — specifically his personal interactions with his leadership, Stalin’s family and that of the other leaders, and how one man was effectively able to rule so cruelly without question for so long without significant opposition.

The result of exhaustive research on the part of Montefiore, Stalin: The Court of the Red Tsar (2003), is a masterful account of those very topics, spliced deftly into a historical work which reads easily for the layman but will not displease the historian.

Taking the reader on a journey into the inner recesses of the Soviet leadership during this period, opening with the fateful suicide of Stalin’s wife Nadya in 1932, Montefiore exposes talents that were entirely Stalin — genius organizer, the ability to assess talent and utilize it, knowing when to strike against a political enemy and when to mend fences, and above all knowing how to use fear and terror to control others, especially those closest to him.

Less a chronological take on the history of Stalin’s rule and more an assessment of his leadership abilities, the source of his cruelty to those around him and his family, as well as the larger nation — Stalin: The Court of the Red Tsar does not miss the mark. Filled with detailed and painstakingly-researched material — some of which had never been exposed publicly — the work is also a pleasure to read, never too cerebral for the non-historian, and never too academic for the layman.

For a man once quoted as saying, “Death solves all problems. No man, no problem”, Stalin was never one to spare the rod.

Throughout successive leadership purges and during the Great Terror of the late 1930s, he unleashed a bloodbath that destroyed almost all of the old leadership of the party — friends, enemies, even family members, anyone that Stalin viewed as a threat.

While this subject matter has been covered by numerous historians in the past, it is Montefiore’s obsession with anecdote and detail that makes Stalin: The Court of the Red Tsar such an engrossing read.

Explored in great detail are accounts of Stalin’s “breakdown” following the the Nazi invasion of the Soviet Union in 1941; his embarrassment at his wife’s suicide, which was a state secret until long after his death; his numerous holidays in southern Russia, where he ruled like a distant potentate from obscure rural locales and palaces; his motivations for the murder of individuals close to him in the leadership; his directorship of the show trials of the 1930s; his indifference and even a degree of revelry in the mass starvation of millions of Ukrainians during the Holodomor; and the nearly-every night, all-night parties Stalin used to torment his inner circle in the years following WWII before his death in 1953.

The work also lays bare the hypocrisy of the Soviet leadership, who were always able to convince themselves that the often terrible actions they took were in the interest of international Communism or the ultimate triumph of Bolshevism. Although the realities of Stalinism would have been starkly apparent to most from the Western sphere of influence, those individuals steeped in the glories of the revolution and socialist ideology proceeded through Stalin’s reign with self-induced blinders to state-sponsored horrors that were institutionalized and made commonplace.

Also investigated in delicious detail is the fates of the great individuals and families that made up Stalin’s inner circle following his death, including the rise and eventual fall of Nikita Khrushchev, the arrest and execution of Lavrenti Beria, the post-Stalinist survivalism of Anastas Mikoyan, Vyacheslav Molotov, and Lazar Kaganovich — who actually survived to see the beginning of the end of the Soviet Union he had helped to build and preserve, the last of Stalin’s loyal magnates to die in 1991.

Exhaustively researched but thoroughly readable, casting light on details about Stalin’s reign that have remained murky at best, Stalin: The Court of the Red Tsar is a work replete with insight but also keeps the reader addictively turning pages throughout.