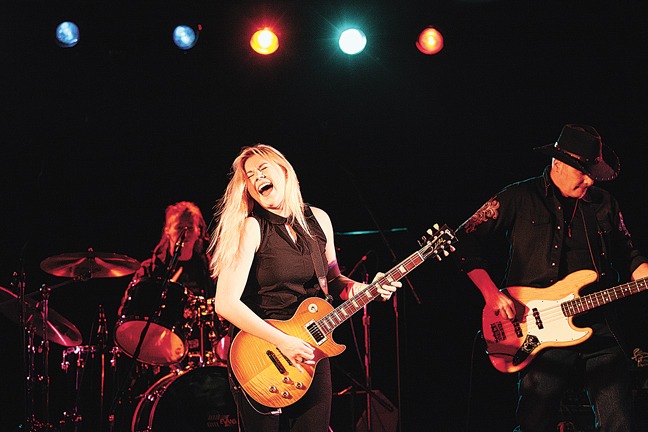 Another successful blues outing for Bow Island is in the books, with British-born guitarist Joanne Shaw Taylor showing the crowd that America’s deep south isn’t the only environment that breeds inspiring blues talents.

Incorporating her smoldering vocals into a blistering wall of guitar sound, or more finely hued and subdued traditional-style blues riffs, Taylor did not disappoint a near-capacity crowd at the Bow Island blues venue on Jan. 31.

Playing the fifth show of the 2014-2015 season in a more-than-two-hour set with her three-piece band, Taylor’s engaging smile and masterful command of chords and strings punctuated the evening, riveting the crowd through towering solos and more grinding contemporary blues selections.

Taylor also played with Dave Stewart’s supergroup D.U.P. on tour in Europe in 2002. While not touring on the road or at home in Mother England, Taylor resides in Detroit, Mich.

Discography: White Sugar (2009), Diamonds in the Dirt (2010). Both albums peaked at #8 on the U.S. Billboard’s Top Blues Albums chart. Taylor’s fourth studio album, The Dirty Truth, was recorded in Memphis, Tenn. and released in September 2014.