Orange is the new blue in Alberta 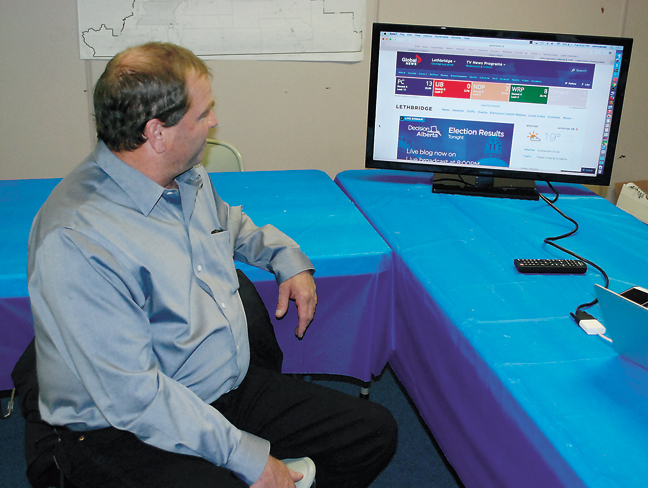 It has only happened twice in Alberta’s long political history — in 1935 and again in 1971 — but Albertans are now waking up to a new and unprecedented political reality.
In a landslide majority victory, Rachel Notley and the NDP have decimated the ranks of the long-ruling PC government, even pushing Jim Prentice’s party out of the official opposition position, which will be taken by the Wildrose.

Notley’s NDP has secured 54 seats for a majority, while Brian Jean’s Wildrose has edged out Jim Prentice’s PCs from the official opposition with 20 seats. Bringing up the rear are the PCs with 11 seats, while the Liberals and the Alberta Party have squeezed in with one seat apiece (as of 11 p.m.)

The Wildrose’s Grant Hunter has secured the riding as an opposition MLA, while Taber PC candidate Brian Brewin has been defeated.

“We had a fantastic team, hard working — it’s not about me, it was about the team,” said Cardston-Taber-Warner’s new Wildrose MLA Grant Hunter. “Property rights were a huge issue here. We showed our resolve, and we will continue to do that. The second thing that I’ve seen is disgust over tax hikes. One thing I’d have to say is this: one thing I really saw a lot of is people saying is look, if you’re over on that side and you want to make sure you want good representation in all parts of this riding. I’m absolutely committed to making sure that we have good representation everywhere.”

Reached late on election night, Hunter admitted he was surprised by the results that will see a NDP majority take the helm of Alberta politics for the next four years.
“They’ve talked about getting rid of the 59 new tax hikes, and so I hope they will be able to do that, because they’re not popular. I hope they stay the line on fiscal prudence, and if they do that, then they have our support. I just never thought I’d see the day when the NDP takes Alberta.”

“I think we’re going to be looked at in a different light come tomorrow. We no longer going to be ‘fortress Alberta’. No one is going to take this province for granted anymore. No political party will. We’ve basically had a conservative government in charge since 1935, and all of a sudden, we have Rachel Notley as premier. It’s very encouraging to see the numbers that have come out, and it’s a great day for democracy in Alberta.”

Years upon years of political experience on M.D. of Taber council as either a councillor or reeve, the message was resounding to PC candidate Brewin where a majority NDP government was called barely an hour after the polls closed.

“Albertans sent a pretty clear message, they were looking for some change and something different. It was a clear message that they wanted something different and I can respect what the voters wanted,” said Brewin of the orange wave of NDP support that engulfed the province, including NDP local candidate Aaron Haugen who garnered nearly 20 per cent of the popular vote for Cardston-Taber-Warner, which has been unheard of in the history of the riding, which peaked at six percent in 1997.

Brewin’s campaign for a MLA seat may have been unsuccessful, but it was filled with determination as for nearly a month he canvassed his constituents.
“Literally for 28 days I’ve been on the road from one end of the constituency to the other trying to focus on certain towns on certain days,” said Brewin. “Some days I put up to 800 kilometres (travelling).”

Brewin promised to still be a champion for rural Alberta as he returns to his position of reeve on Municipal District of Taber council.

“My views still haven’t changed. I still support rural Alberta and will carry on as reeve,” said Brewin. “I’ve always enjoyed my role as reeve and I certainly had some ideas that would have been nice to move forward, but again, the people have spoken and I respect that. I will work at a different level and a different way at it.”
Brewin was gracious for all the support he received in his campaign push for an MLA seat.

“The support for my campaign has been amazing from all ends of the constituency. It’s been humbling to go around and meet so many good people who are willing to give their time and help you out.”