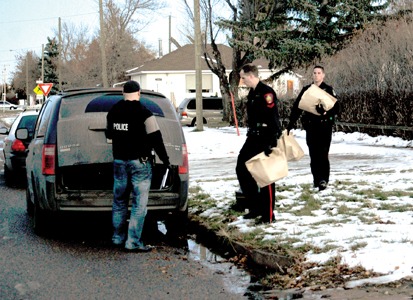 Like a chapter right out of a Mickey Spillane novel, Nicholas Jacob Funk walked into a Subway restaurant Nov. 17 of last year, pointed a double-barrel shotgun at an employee and demanded cash.

“Put the money in the bag or I’ll shoot you,” he said.
Funk got away with $585, but he didn’t have much time to spend it. He and another man were arrested in Taber three days later, where police also recovered several articles of clothing, a vehicle and the weapon they believe was used in the robberies.

Funk pleaded guilty Wednesday in Lethbridge provincial court to charges of robbery and attempted robbery and was sentenced to five years in a federal prison.

Court was told another man drove the getaway vehicle and dropped Funk off at the Subway restaurant, then picked him up behind the business after Funk, whose face was at least partially covered, robbed it.

Two days later, the men tried the same thing at another Subway, but in that incident the employees managed to run out the back door and Funk left empty handed.

The co-accused, Chad Hanson, previously pleaded guilty to robbery and was sentenced to three years in prison.

At his sentencing hearing in April, court was told Hanson claimed he didn’t know Funk was armed.

In addition to his five-year sentence, for which he was given credit for nearly a year spent in pre-trial custody, Funk must also submit a sample of his DNA for the National DNA Databank, and he is prohibited from possessing certain firearms and weapons for 10 years, and others for life.

Several weapon-related charges and two counts of being disguised while committing an indictable offence were stayed by the Crown.

A stay of proceeding means the charges can be returned within a year, but after that they are stayed permanently.