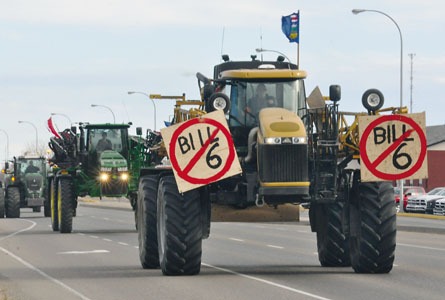 Dozens upon dozens of heavy farm machinery made their way through the Taber area on Monday afternoon with plenty of angry farmers in tow voicing their displeasure as part of a province-wide rally against the controversial Bill 6 — Enhanced Protection for Farm and Ranch Workers Act.

“As farmers and ranchers in southern Alberta, we want to be heard and we have felt we haven’t been heard. The government has set up some meetings, but they are not serving the cause,” said farmer Jim Bettcher, who was part of Monday’s rally which featured farmers from Taber, Coaldale, Grassy Lake, Burdett, Bow Island and Skiff. “We just want to say, before you ram this bill down our throats and pass it into law, take the opportunity and listen to the people it affects the most. Right now, it is so vague, we don’t know any of the real details of the bill. Just trash the bill and start over, listen to the commodity groups and listen to the producers. Bring us to the table and let us have input.”

Promises of amendments continue to filter in from Agriculture Minister Oneil Carlier as the provincial government announced last week it planned to introduce an amendment to limit the legislation for farms that hire paid employees.

“It’s been so wishy washy. First they said it’s going to be paid and unpaid farm workers, now they are saying the unpaid aren’t in there, so the Hutterites are out and it gives an unfair advantage,” said farmer/rancher Keith Ypma. “It will create way more riff raff between neighbours. We are all family farms that have gotten a little bigger, so we hire employees.”

Ypma is a member of the board of Alberta Cattle Feeders and declared the provincial government approached them once, saying some farmer legislation may be on the way, but no consultations were made.

“We brought in safety people to try and do something. We want to work with them and make some programs, but then they talk about Workers Compensation Board,” said Ypma. “They say WCB, but there are farms and ranches out there that have way better coverage than WCB.”

Despite what has been noted by the Notley NDP government and the Conservative government before that in Alberta, farmer Neil Bareman stated there has been no ongoing consultation with farmers on a proposed bill for years. He finds it ironic that urban-led provincial governments are saying they care about farm safety now, although previous actions painted a different picture. He recalled the Rural Farm Safety Camp that occurred back in mid-July in Taber and not one penny of it was through provincial funding. UFA, the M.D. of Taber and AG for Life were driving forces to the camp.

“Instead of spending money on legislation, why not spend the money on the things that will promote the awareness for farm safety,” Bareman questioned. “Why not invest in things like that? We had 150 kids at that farm safety camp. The government claims that every other jurisdiction in Canada has this legislation, but they fail to claim that Alberta has the cleanest (safety) record among all of them. If you look into the research, Alberta has far exceeded every other province when it comes to farm safety.”

Given the history the province has had in the near past involving agricultural legislation and the wave of demonstrations that have gripped the province since Bill 6 was announced last month, he spoke in no uncertain terms how far farmers would be willing to fight the bill.

“If they are going to put something through, how many farms are actually going to listen and obey the law?” said Bareman. “People went to jail for the Wheat Board, people will go to jail for this as well.”

Jake Schutter farms land south of Grassy Lake and disputes the actual farm accident statistics that are being presented to the public.

“The statistics on farm accidents are totally inaccurate. There is not a good system of keeping track, so anything that happens on a farm, if it ends up in a hospital, it will be marked a farm accident,” said Schutter. “I had a discussion again with our employees (Monday) morning, saying we don’t know all the details, but the employees we have in southern Alberta, and you can’t talk for everybody, but the vast majority of them want to have anything to do with this. They want safe and they want to work and have common sense and do the right thing.”

Schutter noted his farm has had Worker’s compensation coverage for 10 years and not one claim as been made. Nevertheless, farmers should be given choice.

“It should be a choice in this day and age. It comes down to the trust issue again. If the government makes Worker’s Compensation mandatory, that’s the insurance company and they set the rules,” said Schutter, adding farm owners at the rally had other forms of insurance for their workers.

“If agriculture was that bad of a workplace, we wouldn’t be able to get any labour. On the general, farms pay competitive wages and they try and do right with everyone around there,” said Schutter. “We are not out there to get anyone hurt or make them do stuff they don’t want to do. I’m not going to ask my guys to do something I wouldn’t do myself knowing it’s unsafe.”

Organizers of the peaceful protest thanked the RCMP for allowing them to hold the protest and southern Albertans for their patience as the farm equipment made its way through the highway and towns during the protest of Bill 6.

Bill 6 – Enhanced Protection for Farm and Ranch Workers Act – would remove existing exemptions from workplace rules for farms. The bill would amend the Occupational Health and Safety Act, Workers’ Compensation Act, Employment Standards Code, and Labour Relations Code for farms. Changes to OHS are not planned to be implemented until 2017.

– Between 1990 and 2009, 355 people were killed on Alberta farms and 60 per cent of deaths involved heavy machinery. For every death, there were roughly 25 hospital admissions related to farm work and of those 25, 11 included major trauma. The Chief Medical Officer recorded 25 deaths in 2014, including 12 people over 59 years old and two people under 18 years old.

– Currently, only 1,400 of the roughly 42,000 farms and ranches in Alberta have already registered for WCB coverage while others have private insurance or no coverage at all. The government estimates the average farm will pay between $1.70 and $2.97 for every $100 in salary paid for an average annual cost between $850 and $1,450.

– Alberta is the only province in Canada that has exempted farms and ranches from OHS legislation. The changes will mean coverage for roughly 60,000 farm workers in the province. OHS investigators will now be able to conduct inspections and investigate complaints into operations on private farm properties, as well as issue fines and stop-work orders.

– The government says it will work with stakeholders to determine unique labour standards for the agricultural industry, including work hours, overtime pay, minimum wage, vacation days and holiday pay. Alberta would also join eight other provinces in allowing farm workers to unionize and seek collective bargaining.