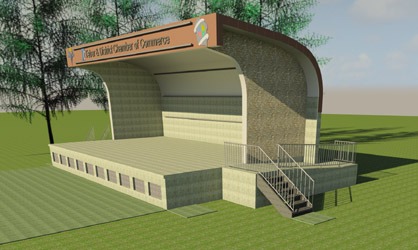 More details and a conceptual design for a permanent Confederation Park stage have been provided to town council by the Taber and District Chamber of Commerce.

At their Feb. 12 meeting, town council voted unanimously (6-0) to accept the concept plan for the stage and recommended a development application be accepted by the Municipal Planning Commission for consideration of approval. Coun. Jack Brewin was absent from the meeting.

“The base is mostly made out of concrete, and the walls are mostly concrete panels, and the roof is standard,” said Martin Groen, heading a delegation from the chamber, prior to the vote. “To make it a little more appealing for the town — it is in the centre of town so it needs to look good. We added a curve to the stage. Not only is it more architecturally appealing, it’s also intented to be a little bit of ‘form follows function’, as we use in architecture.”

“We pretty much think this is the best option for Taber to have a stage,” continued Groen. “It’s pretty much bulletproof and non-combustible, and will serve this community for generations to come.”

All work on the project is intended to be contracted through a tendering process by the chamber, and built according to current safety codes and standards; the project will be completely funded by the chamber, and the completed structure is intended to be as “vandal proof” as possible; and the stage will be open to all groups within the community to use.

“There’s a ramp on the back side of the building. It has two uses, both handicap use, and you can roll equipment on it and don’t have to carry it up,” said Groen.

The structure would be built by licensed contractors in the exact location of the current Cornfest stage, using the existing power pedestal, and would face east to shelter it from prevailing southwest winds.

The chamber is considering construction of a 40’x40′ concrete dance floor, and a 40’x24′ permanent stage.

On Jan. 11, a delegation from the Taber and District Chamber of Commerce requested council’s support to build a stage area in Confederation Park. The stage is intended to be funded, designed and constructed by the chamber or their contractors. Once completed, the stage would be turned over to the town to manage and maintain.

Preliminary discussions between the chamber and administration have focused on electrical servicing, crime prevention through environmental design aspects, an access door to the back of the stage, a wheelchair ramp, exterior finish, and design for a possible expansion in future.

Referencing comments made by Coun. Joe Strojwas at the Jan. 11 regular meeting, suggesting the chamber be responsible for booking and maintenance of the facility once completed, delegation member Tom Paterson indicated this suggestion had not been met favourably by the chamber board.

“Once again, we’re looking at this as a gift to you folks. This discussion about the management and maintenance was brought up at the last chamber meeting, and it was unanimous that the chamber does not want the responsibility for management. I understand that it might be trying to do us a favour by allowing us to have some revenue, but we have one single employee that’s very busy all day, and the rest of us are volunteers, and it’s just not something that we want to take on. We’re quite happy to build this, turn it over, and then you have the people and the resources to take care of it. I have to say there was a certain level of indignation from some people about that.”

“Being that it’s pre-cut concrete, the maintenance is next to nothing,” said Coun. Randy Sparks. “The only maintenance is if someone decides to spray bomb it. Very nice design, and thanks for including all of this information in our package.”

The chamber was seeking swift approval of the project considering the timeline it had established for completion prior to Cornfest 2016.

“I’m very happy with how the stage is now designed,” said planning manager Cory Armfelt. “I have to admit that I had some reservations about the first iteration of that. I think Mr. Groen did a fantastic job.”

While supportive of the project in principle, as well as recognizing a need for urgency, Sparks spoke of a requirement for organizations to follow the strictures of due process in future.

“I know this is very important to get on track. But in Mr. Armfelt’s discussion here, he brought up the word recreation. This has never been before the recreation board. This has never been discussed, this information was never presented to the recreation board. So even though it seems to me that this has been fast tracked because it needs to be done this summer, were it to have gone through the proper protocol and went through the rec board first, we’d have been having the same discussion this evening because we’d have had this discussion at the rec board level. And it didn’t happen.”

Circumventing the town’s due process in an attempt to “fast track” a project can sideline various boards and committees that should be permitted to have a voice at the table, according to Sparks.

“So I think in the future we need to be very aware of the protocol that has been put in place of how these things come to this council. Because we — someone — leap-frogged part of the protocol and brought it right to council, instead of letting the rec board — who is in charge of parks and recreation — have a look at these designs and plans. We have boards and committees in place for a reason, and we need to make sure that we utilize those in the future, on any of these projects.”