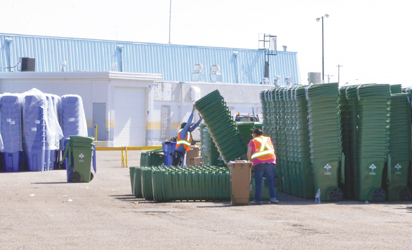 Dreaded by some, applauded by others, the appointed day is fast approaching when the community will be switching to a new rollout three-cart collection system as part of the Town of Taber’s solid waste initiative.

Approved by town council in 2015, the cart system will replace the present system of large-scale bin collection, separating waste streams into recyclables, compostables, and garbage. Initially the program will only include the town’s residential areas and will not immediately address multi-occupant dwellings, industrial areas, or the downtown — areas which will be phased into the system at a future date, yet to be announced by the town.

The carts were delivered to most residential properties in the community last week. Residents unfamiliar with the new system set to be implemented in early May have been scrambling to familiarize themselves, but many questions have remained in the minds of citizens about details surrounding the program’s operation in practice.

“To be honest, 99 per cent of the people that I talk to, or that have come to see me, are actually very positive about it,” said Mayor Henk DeVlieger. “It amazed me, I was expecting way more negative comments. The comments I’ve received have been very positive. It has a lot to do with educating the people. People really need to read that booklet — what to throw in what bin — it’s going to take probably a half a year. There’s a lot of communication that has to take place yet, but in general, most of the people have been very positive, and I’m happy about that.”

The largest (blue) cart is for recyclables, the second largest (green) cart is for compostables and the third (brown) cart is for garbage. Three residential collection days have been designated, which includes Area 1 (Tuesdays), Area 2 (Wednesdays), and Area 3 (Thursdays). Carts must be stored on the property of the owner, not on town property such as the street or alleyways. There will be no changes to the current garbage and recycling fees charged to residents on their utility bills under the new system.

Public works director Gary Scherer dispelled one area of confusion for residents regarding alley versus curbside pickup, indicating that if you currently have alley pickup, your carts will be picked up in the same location.

“That’s exactly right. Unless you request something different. There have been a couple that have requested curb pickup.”

“If you have a disability, or you don’t have alley access.”

For front curb collection, carts should be at the curb for collection no later than 7 a.m., should be on the street with the wheels against the curb, making sure the arrow on the top of the lid is pointing to the centre of the road. Leave at least one metre between and behind the carts and other objects (cars, fences, poles) and at least three metres above the cart. Carts need to be removed from the street by the end of your collection day and stored on your property. During winter, carts should not be placed on, or behind, snow banks.

For alley collection, carts should be in the alley for collection no later than 7 a.m., should be on your side of the alley with the wheels facing your house, making sure the arrow on the top of the lid is pointing to the centre of the alley. Leave at least one metre between and behind the carts and other objects (cars, fences, poles) and at least three metres above the cart.

Carts need to be removed from the alley by the end of your collection day and stored on your property. During winter, carts should not be placed on, or behind, snow banks.

Compostables will include food, food-soiled paper, yard and garden waste.
Compost cannot include plastics of any kind, styrofoam, glass, metal, diapers, soil or rocks. Carts are collected every week. The small ‘kitchen catcher’ is designed to fit under the sink.

Scherer noted that meat products — sometimes not included or recommended as a compostable material — is compostable by the process being utilized by Bio-Can, the town’s compost operator.

“The compost operator is Bio-Can. He gave a presentation, and he actually showed why you can put meat in. If you get the temperature up to 65 to 70 degrees Celcius, it burns off the bacteria — so it really doesn’t matter that little bit of meat in there. A little bit of residential meat is fine.”

“Shredded paper has to be in a clear plastic bag,” said Scherer. “Everything else just leave it loose.”

Refundable containers can still be retained and returned to the bottle depot. Blue recyclables carts will be collected every two weeks, and recyclables can be loose and unsorted. Items that cannot be recycled include scrap metal, needles or syringes, plastic microwave trays, window panes, mirrors, ceramics, Pyrex dishware, plastics other than those accepted (1-7), paint, pesticides, oil and cleansers, stickers or address label sheet waste, waxed paper or waxed cardboard, styrofoam or paper to go containers, organic material and food waste, and electronic waste (batteries, cellphones, computers).

“On anything plastic that can be recycled, if you turn it over there’s a recyclable symbol that has a number,” said DeBona. “Anything numbered one through seven will be accepted. If it doesn’t have a recyclables symbol and no number, then we don’t accept it.”

The brown garbage cart, dubbed ‘residual waste’, is collected every week, but could be subject to change in future as the town improves on recycling and composting practices. All items that you cannot recycle or compost will be bagged and placed in your brown cart.

“Very seldom. I haven’t heard of any. We had more pest issues when we had front pickup.”

Frequently a problem in southern Alberta, high winds are likely to play havoc with the carts — but Scherer characterized accounts of carts sailing away from residences on an uplifting gust as an exaggeration.

“Usually when there’s material in them, being put out for recycling, that’s not an issue. It’s when they pick it up and drop it off. They will blow over. Usually they just fall over. They won’t be flying down the lane by any means. It’s just a matter of picking it up and hauling it back into the yard.”

Considering Taber’s sizable population of ESL learners, as well as ethnic populations where English literacy is sometimes limited, the town’s informational booklets included with the carts were intended to give a visual representation of what is required of residents.

“We tried to include a lot of pictures, so that people that didn’t speak or read English could at least kind of see what’s going on through the pictures, and the diagrams that were in place,” said DeBona. “And if they have any concerns, they can call. I haven’t had a single call in that respect yet.”

“All of it is pictorial. You can look at the calendar and see where to have your carts on which date. You can see the pictorial of where to put the carts out.”

Carts need to be at the curb by 7 a.m., but can be placed outside after 7 p.m. the previous evening. Carts that are too heavy cannot be collected. During winter, residents are asked to ensure material is free of snow and ice, and are visible to the collection crew.

Scherer doesn’t anticipate problems due to frozen compost material sticking to the bins during winter months.

“We’re well aware of that. Compost is going to freeze, there’s no doubt about it. The bins are tapered, so it should come out, but you can also use the compostable bags ensure that it does come out.”

DeBona added there are measures residents can take to help mitigate the problem should it arise.

“Or you can line the bottom with newspaper so that it’s not sticking to the bottom of it.”

The town will still be offering the spring and fall tree trimming program, spending one week in each area to pick up tree branches and leaves.

To help offset the cost to residents of disposing additional waste, the town is initiating a coupon voucher system. Instead of town crews collecting waste from alleys once annually — a program which according to the town was time consuming and costly, unsightly and prone to unforeseen weather delays — coupons/vouchers will now be issued to cover some of the disposal fees for large items that need to be removed to the waste transfer station.

The coupon service can be utilized throughout the year. Each residence in Taber will receive three coupons per year, covering the disposal of 250 kilograms of waste, and can be picked up at the town office (4900 50th Street) or the town shop (6201 54th Avenue). Coupons must be presented to personnel at the Taber transfer station weight scale.

Concerns about carts potentially obstructing the thoroughfare in alleys during pickup days are unfounded, according to Scherer.

“No. If you look at the bins that are in there now, they’re sticking out five feet. That cart is only about 20 inches wide, and if you put it a metre out, you’re about the same. Most of the lanes are wider than normal lanes in Taber. We have some lanes that are nine metres wide, normally they’re about six.”

The town’s Waste, Recycling and Organic Materials Bylaw 4-2016, which includes a lengthy fine listing for violations, is not intended to be a cudgel to force implementation.

“We’re not doing this to be a cash cow,” said Scherer. “Remember, all we’re trying to do here is lessen our impact on the environment, lessen our impact on landfills — which we know costs are going up — and now with the new NDP carbon tax, that will lessen the amount of fuel we use to get it to the landfill.”

DeBona noted enforcement would likely be applied only to problem parties who choose to flagrantly violate the bylaw.

“The bylaw will come into place, once it’s passed, if we have a particular re-occurring problem with the same property not abiding by the rules.”