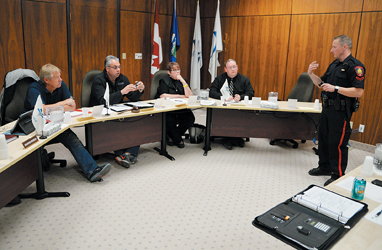 A demonstration of the new Taser units being issued to the Taber Police Service electrified members of the Taber Municipal Police Commission at their most recent meeting.

Speaking at the May 12 meeting, Cst. Tim Johnson explained the use and officer protocols with regard to the replacement Taser units.

A Taser or conducted electrical weapon (CEW) is an electroshock weapon sold by Taser International. It fires two small dart-like electrodes, which stay connected to the main unit by conductors, to deliver electric current to disrupt voluntary control of muscles causing “neuromuscular incapacitation.”

Someone struck by a Taser experiences stimulation of sensory nerves and motor nerves, resulting in strong involuntary muscle contractions.

“Our body runs on electrical impulses to the muscles,” said Johnson. “So this just messes with that, makes it tense up, so you can’t function on your own. Once the current is off, you’re fine.”

The current model being used by the Taber Police Service is the X-26, which has been slated for replacement.

“What you’ll find is it’s actually quite similar to that one,” said Johnson. “What Taser has done — that’s what they call analog technology. This one is what they call solid-state, or digital technology. Some of the issues around Tasers, what the province has done is have us send the Tasers away at a certain time to get tested, to make sure they’re all functioning properly and, specifically, what the charge output was.”

Improvements to the new design, the X-26-P, closely monitor the charge delivered during deployment.

“What Taser has done with these is they’ve made it so it’s actually quite a bit safer, as far as making sure that the right charge is being delivered if it is deployed,” said Johnson.
“What this one does is it actually checks what the charge is each time it cycles, to make sure the right voltage is being deployed. This one actually records it.”

“So what I can do if we do have a deployment, and there’s a complaint or some issue, all of that data is recorded and it shows exactly what the charge output was. So if there’s any kind of allegation that it wasn’t functioning properly, we have now a specific record of it to support that the equipment was operating correctly.”

Johnson’s demonstration to the commission included an actual test-fire of the device on an inanimate object, and was deployed by commission chair Ken Holst.

Tasers were introduced as non-lethal weapons for police to use to subdue fleeing, belligerent, or potentially dangerous people, who might otherwise have been subjected to more lethal weapons such as firearms.

“The other thing is Taser isn’t selling or servicing those any more, and one of our Tasers is already past the five year recommended replacement,” said Johnson. “For us, the main thing was the safety aspect. If they have a product that they claim is more safe, and is proven to be more safe, we’d be remiss if we didn’t make efforts to actually use that instead of the old one.”

Johnson related that simply brandishing the weapon and using a targeting feature is often enough in threatening situations, rather than an actual deployment.

“What we find is deployment of the laser on an individual de-escalates situations very quickly.”

From personal experience, Johnson pointed out he would rather be Tased than pepper sprayed. Officers are no longer required to be Tased as part of their training, however.

“They’ve changed that. They can’t make someone get Tasered. Honestly, I’ve been Tasered probably 12 or 15 times. Not because I like it — I actually got the actual prong shot once in the back, up in Canmore when they were testing. If you’re going to get Tasered, here’s a trick that I learned. Make sure all the air is out of your body so you can’t scream. So even if you want to scream, you physically can’t. Other than that there’s no trick. I’ll be Tasered any day as opposed to pepper sprayed. I’ve been pepper sprayed a few times, and pepper spray is horrible because it stays with you, whereas that it hurts but it’s over.”

Although multiple charges could be delivered to an individual following deployment, this is not a recommended practice.

“It’s set to five seconds. If you hold the trigger down longer, it will continue to cycle. But what’s recommended is you don’t. You always let it do that five seconds. That allows an additional member to come in and hopefully get some handcuffs on before you’d have to cycle it again,” said Johnson. “If someone does get Tasered, we have protocols. A supervisor has to be called, we have to look at getting medical attention.”

In Canada, incidents such as the Robert Dziekanski Taser incident at Vancouver International Airport in 2007 have led to Taser safety issues having been extensively researched and investigated.

“The issue around whether or not the Taser is a lethal device, we would suggest the research demonstrates that it’s not,” said Chief Graham Abela. “The issue is, in the Dziekanski case, I think it was indicated as a contributor, but not necessarily the cause. It’s a very important distinction between the two. We work with right now several academic researchers across the country — when I say we, I mean the Canadian Association of Chiefs of Police, and the Alberta Association of Chiefs of Police — to make sure that we’re conducting rigourous academic research to make sure that we can stand by that concept.”

Larger individuals are actually more susceptible to the device functioning properly, which can be helpful to officers in threatening situations.

“One nice thing about the Taser, unlike some other things, the bigger and more muscular — the guys I’m going to have a hard time with — the better it works on,” said Johnson. “The bigger they are, the more surface it has to actually run.”

The units, which cost approximately $1,500 each, are not issued individually to officers in Taber.

“We’re very fortunate to have the support of the commission and the community to provide us with funds, that each officer that works is able to carry a Taser, but they’re not actually individually assigned. I think we have four,” said Abela.