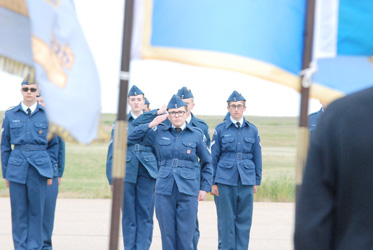 The 225 Royal Canadian Air Cadet Squadron Taber Comet will be celebrating 75 long years of service to the community in 2017, and organizers are planning an extraordinary event for the squadron’s dodranscentennial.

“As a local representative to the Canadian Forces and the Department of National Defence, we are very proud of the fact that we have Canada’s longest running youth movement, the cadet program, in all its various forms — air, army, and sea,” said squadron administrative officer Chris Nguyen, speaking at town council’s June 27 regular meeting. “We will be entering our 75th year coming up this training year, the fall of 2016 and the spring of 2017, is our 75th anniversary here in Taber.”

To help organize and fundraise for the event, scheduled for the weekend of May 6, 2017, the squadron has formed a society, according to Nguyen.

“We’re very lucky and fortunate to have the support of our Squadron Sponsor Committee, which has manifested into the (225 Royal Canadian Air Cadet Squadron Taber Comet) 75th Anniversary Society, in preparation for this big celebration coming up. They have some fantastic events coming up that we feel would be a great boost to the community, as well as to bring back alumni from our squadron as well as members of the government and royal family. That will really bring a huge population boost to our event coming up for 2017.”

Heading up the society’s event planning, organizer Kevin O’Grady detailed some of the high-profile dignitaries that are expected to attend the event in 2017.

“The cadet program has been around, a lot of people don’t realize, but the army cadets actually started back in 1862. The cadet program is the longest running youth program that’s been around, and it’s open to anybody regardless of background. Currently there’s 53,000 cadets in Canada right now, with one third being females. We’re planning on some big dignitaries coming. Lieutenant Governor Lois Mitchell is already confirmed that she plans to attend for the 75th. Vice Admiral Ron Lloyd, who as you know just became commander of the Royal Canadian Navy, is definitely coming. Brigadier General (Ret’d.) Ray Romses from Lethbridge definitely plans to be there as well.”

O’Grady envisions the celebration as incorporating the entire community, rather than a more intimate squadron-sponsored event.

“There was an invite sent out to the royal family, and we have not heard back from them, in case somebody is around. But we plan to make this not just the 75th anniversary for the cadet squadron, it’s also the 75th anniversary for the town of Taber having the squadron, which is very important to the town and to all of us. We have kids from Lethbridge, and from as far away as Burdett, Vauxhall, one year even kids coming down from Brooks, involved with the Taber cadets. It is something that has drawn a lot of people to the town.”

The squadron is requesting use of the town’s Community Centre Auditorium, including meeting rooms and the Taber Arena.
Approximately 150 air, army and sea cadets from various squadrons are expected to attend, which will include a review and inspection by dignitaries.

“We’re going to have at least 150 cadets — air, army and sea — and we’re going to have a practice drill in the morning,” said O’Grady. “The 20th Field Battery has already talked about coming out and assisting with making sure they’re all on the same page. In the afternoon will be a review and inspection of the cadets.”

Nguyen pointed out there may be an opportunity for town council to ceremonially present the “keys to the town” for the duration of the event.

“From a military standpoint, this is also an opportunity for town council to allow our squadrons, as well as the military personnel, the freedom of the town, so to speak, which allows for a very traditional, very military march and access to the town so that we can parade. In addition to that, with some of the key dignitaries that are coming, there might be an opportunity for a key (keys to the town) presentation as well. That’s something that town council has done in the past.”

The cadets program is special in Canada, added Nguyen, for the fact that it is entirely free for participants — a not unattractive feature considering Alberta’s current economic climate.

“We’d really like to express and promote the fact that this is a youth program that is still completely free for youths aged 12 to 19. We’re very proud of the fact that anyone from all walks of life is welcome. We don’t discriminate against anyone, everyone is absolutely welcome. The fact that we produce positive, contributing members of society back to the community is something that we really strongly believe in.”

O’Grady confirmed the required town facilities have been booked for the May 6 event. Coun. Rick Popadynetz questioned if planned renovations for the facilities in 2017 might throw a wrench in the works for the squadron’s event.

“There are some upgrades going on, but not in May, so you should be fine,” said CAO Greg Birch. “The plan is to do most of the work when we shut down in summer.”

Employing an abundance of caution, recreation director Aline Holmen was slightly less certain than Birch if renovations could impact the event.

“We’re not 100 per cent certain yet — we’re ascertaining it will be later in the year — but we’ll know more as this year currently progresses.”

Mayor Henk DeVlieger applauded the efforts of the squadron and its potential to shine a light on the community in early 2017.

“It’s a main event. I know the cadet program is well liked. It’s a free program for everybody, and it also shapes kids to become good citizens. I think it’s very important, and I think again, too, it will help put Taber on the map. I’m pretty excited to hear it.”