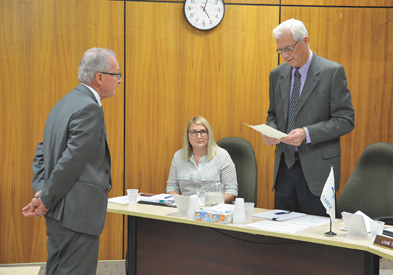 Questions surrounding who will be included as part of a Town of Taber twinning delegation to Higashiomi City, Japan in 2020 has resulted in a split 5-2 vote following closed session.

Due to the issue being debated behind closed doors, the nature of council’s discussion is only speculative as closed session is not open to the public and no formal record or minutes of the discourse are usually kept.

However, prior to the adoption of the agenda at town council’s Sept. 9 meeting, Coun. Garth Bekkering questioned the inclusion of Item 9.3 – Town of Taber and Higashiomi, Japan: Delegation 2020 for closed session discussion.

“Before we proceed with the adoption of the agenda, I would like to ask a question of administration regarding Item 9.3 closed session. Why is in in closed session?”

CAO Cory Armfelt explained that through consultation with Mayor Andrew Prokop prior to the Sept. 9 meeting, it was decided that Item 9.3 would be discussed in closed session.

“Carrying on a conversation with the mayor regarding preparation of the agenda, we go through every item and consider where it should be located on the agenda, whether it is open or closed,” said Armfelt. “Through that discussion with the mayor, it was thought that this should be in closed session, and under Sec. 24 of the FOIPP (Freedom of Information and Protection of Privacy) Act it indicates that ‘information, including the proposed plans, policies or projects of a public body, the disclosure of which could reasonably be expected to result in disclosure of a pending policy or budgetary decision’ can be located in closed session.”

“So essentially, there could be a budget consideration coming out of the conversation for this particular item, so it was directed to administration to prepare the agenda with this item in closed session,” said Armfelt.

“You’re alright with that?” inquired Prokop.

Following this exchange, the meeting’s agenda was adopted as presented after a 5-1 vote. Bekkering opposed the motion, and Coun. Louie Tams was absent at that time.

After debate of the issue in closed session later in the meeting on Sept. 9, council voted 5-2 to approve sending Armfelt, Prokop and one councillor to Higashiomi City, Japan in 2020; and for flights, accommodations and “et cetera” to be allocated from the 2020 budget, with the purpose to continue to foster good relationships with the Taber – Notogawa Friendship Society.

A recorded vote was called for on the resolution, and Councillors Jack Brewin and Carly Firth opposed the motion.
Council’s resolution did not include any estimates or figures of the total financial implication of the decision for municipal taxpayers.

Under best practices laid down by Alberta Municipal Affairs, as an elected body, municipal councils should avoid conducting business in closed session, including discussion of difficult topics such as budget deliberations, capital expenditures, tax recoveries, salary ranges or hiring of additional municipal staff, bylaw amendments, subdivision proposals, and “any contentious issues such as sensitive local issues.”

Taber entered into a twinning agreement with the Town of Notogawa in 1982. In 2005, the Town of Notogawa amalgamated with five other towns in Shiga Prefecture (Yokaichi, Eigenji, Gokasho, Koto, and Gamoto) to form the new community of Higashiomi City. Along with Taber, Higashiomi City is twinned with cities in Korea, China, the U.S., and Sweden. Several Alberta municipalities are twinned with Japanese counterparts, including members of the Alberta/Japan Twinned Municipalities Association. Nine of those municipal twinnings are in Hokkaido.