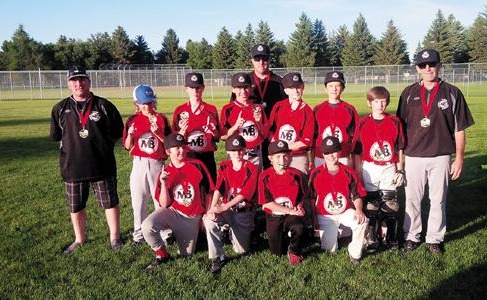 Although the numbers were small overall for the Major division in youth baseball for Taber, the accomplishments were big as Taber earned the Norcrest Major Division championship last week with an 8-5 win over Coaldale 2.

It was a season to remember as the team finished first overall in the league standings at 10-1, dropping only the one game to Coaldale 2 in which they were able to get its revenge in the championship playoff final as the team went 4-0 in the playoffs.

“The Coaldale team has two of the top pitchers  in the league. The one boy is by far the hardest thrower in the league and he was the one who burned us down in our (league) loss,” said Cam Cleland, co-coach of the Taber Major baseball team. “We told the kids to step in and draw courage and stand in front of that fastball and put the bat on the ball. That is just what they did. We got some hits off of him, we got a few walks and a few hits and we were able to generate some runs off of him.”

Coaldale’s top hurler left the game after his 85 pitches in four innings, surrendering four runs. Taber continued on to jump all over the reliever, putting up four more runs in one inning before holding on for the win.

“We threw what we would consider our two best pitchers against them. Brayden Peters started for us and he went a full 85 pitches in three innings having a little bit of trouble with control, but he battled and gave us a chance to win,” said Cleland. “Kole Fujita came in and finished off the last three innings keeping things in the strike zone, throwing some groundballs. He had solid defence behind him, making plays when we needed to and getting it done.”

It looks like the team may be able to make a run for it next season as only three players graduate, having three players that qualified in the minor age division that played up along with four first-year major players.

“Ot was a great season for the kids. We only had 11 players come out in the major group for the whole Town of Taber. They had a great experience in baseball and we taught them something a little bit,” said Cleland. “To go through the whole season with only one loss, it was a lot better than I thought we would do. We kept it fun and light, but in the same breath we made sure they played the game with the fundamental situations when they come. I think at the end of the day that was the forte of our ball team is we played a little better fundamental baseball than the other teams. We did bunts when we needed to, we stole bases when we needed to where all the little things added up.”