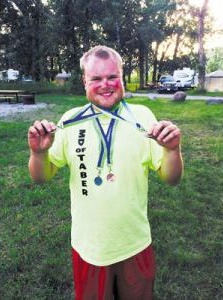 For some people cycling is a hobby … for 25-year-old Blake Schmidt who has autism, it is a passion.

That fact was self evident as Schmidt helped pad an already impressive M.D. of Taber medal count at the recently finished Southern Alberta Summer Games with two gold, a silver and a bronze in his various cycling categories.

Schmidt has been participating in the Southern Alberta Summer Games for six years now and his training regiment would rival that of his Olympic brethren in the sport.

“We farm out in south Hays and that’s his only mode of transportation because he has autism and can’t drive so he uses his pedal bike. He’s very passionate about it,” said Blake’s mother, Bona. “His endurance is unbelievable. He does not tire. We always say his legs are like tree trunks. When Blake sets his mind to do something, he does, and he does it well.”

Looking forward to the Summer Games every year, by the time May rolls around, Blake ramps up his training every day.

“The M.D. of Taber cycling team has been so good to Blake in accepting him and encouraging him to do well. For years we’ve been trying to find something Blake enjoys and would do and excel at. His brother Justin was involved in a lot of sports,” said Schmidt.

Blake is farm strong where daily riding regiments on some days equaled a trip from Taber to the outskirts of Lethbridge.

“On an average day, because we live out in Hays and our land is all over the place and he helps farm with my husband and my other son, he never wants to ride with them,” said Schmidt. “He puts saddle bags on his mountain bike and he will bring tools and coolers full of pop or water. He will pack that and the strength of him is amazing. That is his passion knowing it’s his only mode of transportation because he can’t drive. On an average day, he will ride at least 50 kilometres a day and it could be in the heat, in the cold or rain, it doesn’t matter, the weather doesn’t matter.”

With the likes of Dale Setoguchi, Sid Tams and Duane Nevil, Blake was encouraged to compete in his first Summer games six years ago where he was thrown into the deep end in a 40-kilometre race by the M.D. provincial park.

“That was crazy. Those three guys really pushed Blake to finish it and from then on they have been a big influence where when it comes to the Summer Games. He is so gung ho now,” said Schmidt. “Blake didn’t really have anyone to go in the relays with (in Pincher Creek) so Janny DeVlieger and Jane Bydevaate came to the camp site and encouraged him to do the relays with them. The same thing with John Muller and his son … the support from the Taber people for Blake is unbelievable, they take him under their wing and gives him the support he needs.”

Some of that support came from the heavens, as Joe McMurdo, who had helped influence M.D. of Taber cycling at the Games since 1983, passed away in February.

“Blake had a really good relationship with Joe. He said several times he wished Joe was here, but he was here. He was still watching us,” said Schmidt.

Blake’s bike he uses specially for the Summer Games is as vintage as the influence as McMurdo’s once on the Games.

Blake inherited a bike from Roy and Bonnie Smith whose son Derald passed away approximately 20 years ago in an accident in Waterton.

“That bike only comes out at Summer Games. This bike means everything to him, it’s his road bike,” said Schmidt. “When they found out how well Blake was doing with his cycling they had kept Derald’s bike and they were a good family friend of my parents and they gave him that bike. He only takes it out during the Games, he keeps it in the basement. We ask him if he wants a new bike with this being an old 10-speed that was big in its day, but he’s ‘nope, I’m riding Derald’s bike.’ There is a purpose and tribute there.”