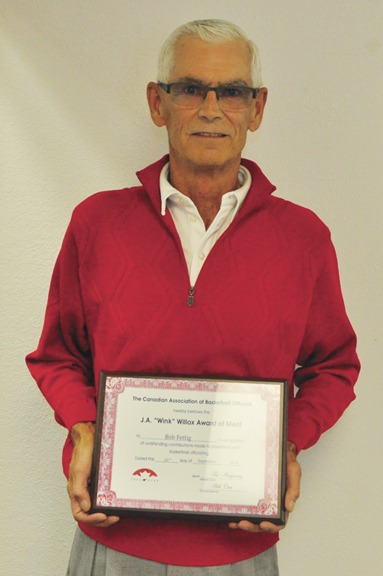 Talk about a pleasant surprise.

That surprise came in the highest accolade a basketball official can get in the country.
Bob Fettig, a 30-year veteran of both officiating and evaluating officials for basketball, was honoured with the Canadian Association of Basketball Officials J.A. ‘Wink’ Willox Award of Merit.

“It’s not given out every year. I heard I was going to be given the award Saturday morning,” said Fettig with a surprised chuckle in a Monday morning interview with The Times.

Fettig had planned on going to the basketball convention in Calgary on the weekend, but having other commitments, he was planning on not attending. That is when Keith Jorgensen, one of his officiating mentors, gave him a call.

“He phoned me on Saturday morning at around 10:30 a.m. and said ‘you have to be there, you are receiving an award’,” said Fettig, as the surprise had to be revealed to get him to the convention. “It was pretty special. There were guys there that had received the award prior who refereed at the Olympics and World Championships in Spain this year. It was an award I did not even fathom receiving.”

Whatever level of basketball Fettig officiated, his philosophies remained the same.

“The thing I can pass onto young officials is when you go out there, make sure you have fun each and every game. Let the kids know you are having fun,” said Fettig. “Have fun and work hard every single game and respect the game. I guess I was successful with that to some extent. The people, the players, the coaches, the moms and dads, they all realized I was having fun with the kids and you gained some respect that way. It somehow worked for me. They knew I wasn’t out there to get anyone. I was just there to call the game down the line.”

Fettig was amazed at who was there at the convention, as it was a who’s who in officiating not only on the national, but international scene as well.

The Taberite never thought he would be in officiating for three decades, but as the years went on, Fettig was having too much fun to stop.

In a refereeing career that spanned from 1979 to 2010, Fettig’s skill as a referee was recognized with plumb assignments moving up the ladder such as college and university Canadian nationals, the Western Canadian Juvenile Championships in Winnipeg and the Arctic Winter Games in Yellowknife.