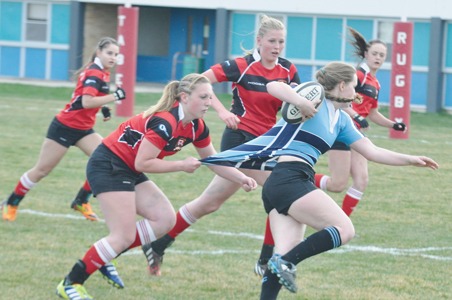 There were 23 players who made the trek, accompanied by 13 chaperones.

“It was a fantastic tour, everything went according to plan. The weather was great, we had sunny weather most of the time we were there. A very big thank you to Heather Brantner for all her hard work and the chaperone parents who helped ensure the tour went smoothly and also to the girls themselves for being such great ambassadors for their school and the community of Taber. They set a high standard in everything they did and left a lasting impression with all the teams we played,” said Andrew Llewelyn-Jones, co-coach of the W.R. Myers Rebels girls rugby team.

“We did a lot of cultural sight-seeing, whether it was castles, abbeys, or outdoor museums. We also did a tour of the stadium where the national Welsh team plays and we saw two top-plus rugby games and played in three rugby games.”

Those games had the Rebels girls finish with a 1-2 record, but were competitive in all three despite going against some advanced competition. The first game was against Neath Athletic, but they did not have enough girls for their club, so they brought in regional players.

“That’s like getting the best girls in southern Alberta together in one team. We played on the oldest rugby ground in Wales and it’s a big stadium ground. We ended up losing 22-14,” said Llewelyn-Jones. “What was very evident playing on foreign soil and their first game of the year, the girls were a little nervous going into that one. We won the second half 7-0 and we were very close scoring a few tries so we could have snuck that one out.”

The Rebels then battled a team from the Wales’ largest and capital city in the Cardiff Quins.

“We lost that game 40 points to 15. Coming from the club side, that team had two international Welsh U19 girls playing. There were several girls that were 19 years of age and we are mostly 15 to 17 years old, so there was a big difference in size. But we actually matched them try for try until they had so much pace on the outside from these two internationals, a lot of the game was there,” said Llewelyn-Jones.

Rebels finished off its competitive rugby tour with a 26-7 win over Whitland.

“They were a team more from the west Wales area and they were unbeaten all season. The girls were a lot more climatized to the conditions out there and type of play and they really raised their game for that one,” said Llewelyn-Jones. “The win capped off a very successful tour. The girls were so pumped up for that game, it meant a lot to me.”

The rugby tour also included a trip to Bath England and also spending their last day in London in which the Taberites took in a play in the west end with the musical Wicked.

The Rebels opened its regular season on a high note as the varsity team beat Matthew Halton from Pincher Creek 48-10 last Thursday at home. The junior varsity team demolished its opposition 80-0.

“I think with the senior group, there was definitely some tiredness from our trip which showed on the practice on Wednesday. It took a couple of days to get rid of that jetlag. And the girls are still a little sore from the tour because the Welsh teams played hard and we are not allowed to play with steel cleats in Canada, but they are allowed over there so there was a lot of bruising,” said Llewelyn-Jones.

The Rebels host Cardston today with varsity at 5:30 p.m. and junior varsity to follow at 6:45 at W.R. Myers field. The team has a tentative road contest schedule din Medicine Hat on Friday but are trying to reschedule due to prior commitments by players.

“There’s a band trip leaving on Thursday for Seattle and that takes a good portion of our senior and our JV group,” said Llewelyn-Jones. “We won’t have enough players.”