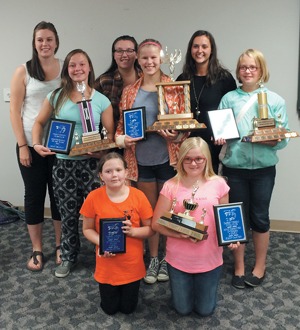 Another successful season has come and gone for the Taber Viper Swim Club, as the organization held its year-end awards last week.

With 50-plus swimmers strong this season, of all impressive finishes, the biggest one of note belonged to Darci Wright, who despite being young in her age category, nearly achieved provincial greatness.

“She is in her down year in the age group, so she still has a year left in her age group. Being that close to a provincial record already is unbelievable.”

Although having not been a member of the Taber Viper Swim Club for that long, Morgan Bos nevertheless wowed the club coaching staff in earning herself Viper of the Year.

“It goes to the Viper who shows leadership, good attitude and effort, and really builds themselves into being a role model along with focusing on their own strokes at the same time,” said Cook, highlighting Bos almost served as another assistant coach out in the pool in her helping her fellow swimmers, while improving her own performances.

“This is only her second year swimming, and it’s usually a veteran that gets this award. She totally blew all the coaches out of the water with her effort and her attitude.”

First-year swimmer Bronwyn McClenaghan earned Rookie of the Year accolades, showing her devotion to the club with her overall effort.

“First-year swimmers are eligible, and it goes by effort and attendance. Being a first year and showing up (to practice) as much as she did, that’s a big commitment. Our sport isn’t just a couple times a week, it’s all week,” said Cook. “With her showing up and always trying her best, from how nervous she was her first day until the end of the season was amazing. She improved so much. She didn’t attend a whole lot of swim meets, but her improvement in the look of her stroke was impressive.”

Showing the highest level of growth from the beginning of the Viper season to the end was Emily Carver who earned Most Improved.

“Her improvement was general overall, but the event she most improved on was the butterfly. She is a nine-10 (year old) swimmer and at 50 metres is tow lengths which is amazing for her to swim at that age,” said Cook. “She shaved ridiculous amounts of time off her fly with the goals she set for herself. She tried so hard all the time and was super determined.”