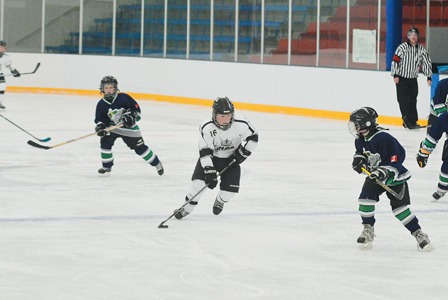 Both novice hockey teams were in action this past weekend with Taber Novice 1 Oil Kings earning a win and a tie.

The win was an 18-5 decision over Lethbridge at the Taber Arena on Sunday.

Chase Stronge and Damian Beskwick each had four goals apiece in the win. Nathan Planger and Max Anderson each had hat tricks. Ayden Umbach tallied twice and Evan Untereiner and Zach Fehr had singles.

The team earlier skated to an 8-8 draw with Raymond on the road on Friday.

Planger and Stronge each had four goals apiece.

Taber Novice 2 dropped an 11-7 game to Irvine Bulldogs on the road on Saturday.

Tage Jensen, Langdyn Cummins and Tyson Church all had two goals apiece and Lincoln Weiss had a single.

Scoring for Taber was Heath Hansen and Walker Skiba with three goals each, Kade Duell and Matthew Gensorek had two goals each, and Carter Jensen, Connor Eldridge, Connor Chapman, Matteo Blasseti and Kyler Marchuk each had singles.

The team proceeded to beat High River 12-3 on Sunday.

Scoring for Taber was Duell with four goals, Hansen, Gensorek, and Blasseti each had two goals. Jensen and Marchuk each had singles.

Lincoln Wiebe and Nixen Miller each had hat tricks for the Oil Kings who got two goals from Madix Miller and a single from Burke Hyland.