Initiation teams play each other on small ice 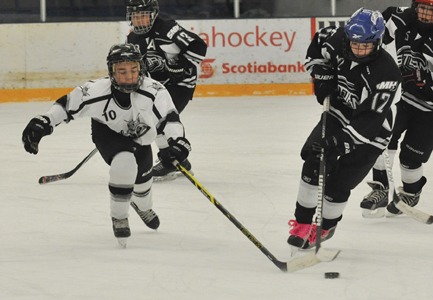 Scoring for Initiation 1 was Cruz Duell, Raiden Koizumi and Heston Hansen, all with hat tricks. Jenner Workman had two goals and Nathan Gensorek had a single.

NOVICE: Taber Novice 1 Oil Kings won both of its games on the weekend, propelling itself to the top of the Spud League standings after the first round.

The end of the win streak was an 11-8 victory over Picture Butte at the Taber Arena on Sunday.

Nathan Planger had four goals and Chase Stronge had the hat trick. Kayden Kress and Damian Beskwick had singles.

Taber Novice 2 Oil Kings dropped an 8-5 decision to Raymond 2 on Saturday at the Taber Arena.

Scoring for Taber was Matthew Gensorek and Callie McCulloch. Connor Eldridge and Walker Skiba each had assists.

On Sunday, the Atom ‘A’ Oil Kings played Lethbridge Tier IV and won 11-10.

Kahil Wright had the win in net.