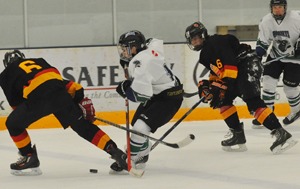 Taber bantam “AA” Golden Suns won both of its games in its home-and-home series with the Medicine Hat Hounds in South Central Alberta Hockey League competition.

The first was a 5-2 win on the road on Saturday.

Peters had a quiet day in net, facing 14 shots on net to earn the shutout.
Taber bantam “AA” Golden Suns are on the road this weekend with a Saturday game against Bow Valley Timberwolves and a Sunday game against Olds Grizzlys.

Brenden Olson faced 39 shot son net for the Suns in the loss.

The team returns home on Dec. 6 with a game against Airdrie Lightning at the Taber Arena at 1 p.m.

MIDGET: Results were unavialable from source with the Taber midget “AA” Golden Suns game against NWCAA Bruins on Sunday.

Taber midget “AA” Golden Suns enjoy a homestand in SCAHL action this weekend, starting off with a Friday night game against Foothills Bisons at the Taber Arena at 8:30 p.m.

The team then hosts CRAA Gold on Saturday at 8 p.m. at the Taber Arena.