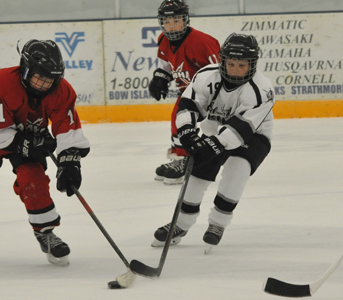 Taber novice 1 Oil Kings earned the silver medal at a hockey tournament in Picture Butte over the weekend.

The gold medal game against the Medicine Hat Penguins was decided in thrilling fashion as after the game was tied 11-11, it went to a shoot-out where it went eight players deep before a winner was decided thanks to the efforts of goaltender Zachary Fehr.

Taber novice 2 Oil Kings were also on the ice, and skated to an 11-4 victory over Irvine Bulldogs on Saturday at the Taber Arena.

PEEWEE: After a two-week layoff, Taber peewee Oil Kings proved to be quite rusty in an 8-3 loss to High Country Rockies at home on Sunday.

ATOM: Taber atom ‘B’ Oil Kings split its two games on the weekend.

The first was a 7-5 loss to Cardston on Saturday on the road.

The team bounced back with a 4-3 win over Crowsnest Pass at home on Sunday.

Lukacs notched the hat trick and Hayden Span had a goal and an assist. Also drawing assists were Rabusic and Holland.

Taber atom ‘A’ Oil Kings lost 9-7 to Airdrie on Saturday.

Scoring for Taber was Kade Duell with the hat trick. Walker Skiba, Heath Hansen, Connor Eldridge and Kyler Marchuk each had singles.

Connor Eldridge had two assists and Kade Duell and Kyler Marchuk each had single assists.

INITIATION: Taber initiation 2 Oil Kings dropped an 11-10 decision to Raymond at the Taber Arena on Saturday on the small ice.