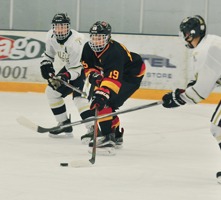 Taber bantam “AA” Golden Suns (15-5-4) had a very successful homestand in South Central Alberta Hockey League competition over the weekend, winning both contest in the process.

The first was a 4-1 victory over Okotoks Oilers (14-7-3) at the Taber Arena on Friday night, as the squad was powered by two power play goals.

Brayden Peters earned the win in net for the Golden Suns, facing 25 shots on goal.

The team proceeded to double up Red Deer Ramada (7-9-8) 4-2 at the Taber Arena on Saturday evening.

Owen Meyer earned the win in net for the Golden Suns, facing 21 shots on goal.

Taber bantam “AA” Golden Suns have the lone game on the road this weekend in South Central Alberta Hockey League play with a Sunday tilt against Okotoks Oilers.

Scoring for the Golden Suns were Gerret Harty, Colby Garner and Nolan Price. Wyatt Broderson and Dallas Cummins had assists.

Brenden Olson faced 31 shots on net in the loss for the Golden Suns.

The team skated to a 9-3 victory over Lethbridge Hurricanes (5-21-0) on the road on Friday night.

Fujita and Gedny both had two goals apiece and Langridge notched a single. Justin Astalos and Palmer both had two assists apiece.
Mack, Fujita, Wiebe, Gouw and Scott Loewen had single assists.

Broc Merkl and Seth Graham shared goaltending duties in the tie.
Taber midget “AA” Golden Suns are on the road on Saturday against the Okotoks Oilers Green before playing the Medicine Hat Hounds on Sunday at 3 p.m. at the Vauxhall Recreation Centre.