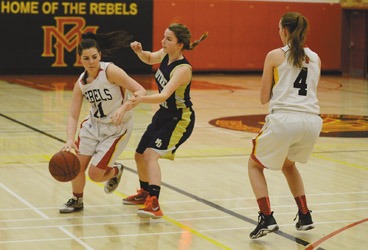 As the W.R. Myers Rebels varsity girls basketball team returned to Southern Alberta High School Girls Basketball League Play after a long layoff, the team has reached a defining moment of how it will react to adversity, having suffered back-to-back losses for the first time this season.

After suffering a two-point loss to Medicine Hat Kwahommies, the team suffered another two point loss to the LCI Clippers at home last Wednesday.

“LCI is a great team, they have strong post players and strong guard play. We started out very slowly and had to play catch up. By half we were only two points down and the second half was a battle. A couple of our girls got into foul trouble so they had to sit for a while and then when they did get back in, had to play very cautiously,” said Kenney Wood, head coach of the W.R. Myers Rebels varsity girls basketball team on the 64-62 loss to the Clippers. “Tough games like the last two league games push us and make us better. Our team goal is to win zones and to win provincials. We hate to lose league games, but most times we can learn a lot more from a loss than we could from a win.”

Millay Johnson poured in 20 points for the Rebels and Natalie Hoyt added 18. Genna Wright had the double-double of 11 points and 17 rebounds.