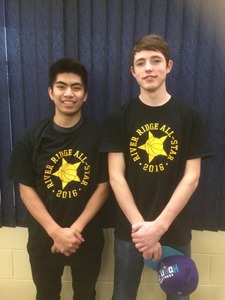 CELTICS PRIDE: Jobert Cruz and Herman Wiebe were selected as all-stars for their stellar play during River Ridge Basketball League play this past season.

Basketball banners have been decided on with championship play.
Those locally that helped their own basketball teams shine were recognized with recent River Ridge Basketball League all-star selections.

St. Mary’s Celtics boys basketball team had two youngsters come to the forefront in Jobert Cruz and Herman Wiebe who were selected as River Ridge all-stars.

“Both of them are in Grade 10 and they both were starters for our team and were basically great leaders,” said Carolyn Siemens, co-coach of the St. Mary’s Celtics boys basketball team this past season.

Cruz was the team’s point guard for the season, a hefty responsibility for a Grade 10 in being the team’s main ball handler and directing traffic for the team’s offence.

“He was confident in bringing up the ball, running plays and taking the lead in directing the team,” said Siemens.

“People would key on Jobert and play extra hard on him bringing up the ball.”

Wiebe was like a sponge on the court, eager to improve his game in any way possible.

“Anything you wanted to teach that kid, he wanted to do it. He worked so hard on the court. He never gave up no matter what,” said Siemens. “Our Grade 10s really had to step up this season. Herman was a kid that could fill any role that you asked of him.”
Students of the game both off and on the court, the two have both helped promote the game of basketball at the school as a whole.

“Those are kids I can count on to help with our junior high program. They are refereeing, they are scorekeeping, they are always willing to help off the court with our programs as well,” said Siemens. “That is really important for the health of our sports programs.”

For the St. Mary’s Auroras girls basketball team, Kallee Bonette and Jessie Braun were given the nod as River Ridge Basketball League all-stars.

“The both grew a lot over the year. I was impressed with how they brought the team up to a competitive level. Jessie was a very strong all-around player where she played many different positions for us and worked very hard at each of them with her versatility. Kallee was our go-to player and was very strong in the post.”