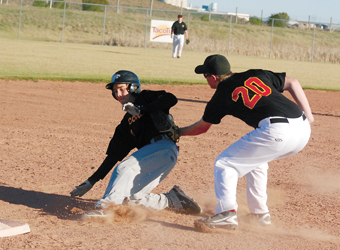 The Rebels hosted Foremost Falcons on April 19 at Ken McDonald Memorial Sports Park and came away with a 10-0 win.

Hutchison proved to be a mad scientist on the weekend in an exhibition doubleheader against McCoy as the man at the helm wanted to see what kind of depth he had at different positions given the games would not count towards the overall league standings.

“They had a really strong team. I don’t know how many of those kids play Legion, but I would assume a handful did for sure. The first game we kept it close with the last inning they ran away with it,” said Hutchison.
“It was really good for the kids because we had a bunch of kids play positions they didn’t normally play. It was beneficial to see where kids could play and we also mixed up the pitching. To tell you the truth, I think we swung the bat better against McCoy than we did against Foremost even though we didn’t win either game. The kids made plenty of solid contact.”

The Rebels hit the road this Saturday for games against Brooks and Crescent Heights in Brooks on the weekend.