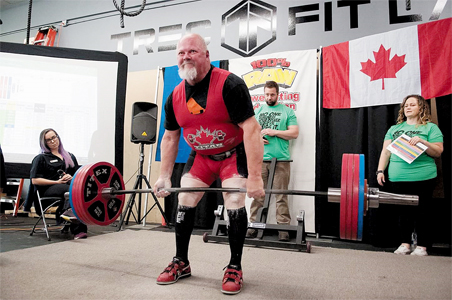 LIFTED UP: As Randy Sparks enters his 60s, he is still breaking Canadian and world powerlifting records. TIMES PHOTO SUBMITTED

Randy Sparks’ return to the powerlifting arena was a successful one as he competed at the 100 Per Cent Raw Powerlifting Provincial Championships in Calgary.

Sparks ended up in first in the 110-kilogram division for 60-to-64 year olds.

“This is my first competition in over three years, as I had some issues that kept me from training as heavy and hard as I need to, to compete at a competitive level. It was so awesome to be able to compete again. As a 60-year-old lifter, I still love to go to the gym and train and I love coaching others in helping them get stronger and accomplish their athletic and powerlifting goals,” said Sparks. “I cannot lift as heavy as I used to, but as an old guy, I am just grateful that I can still go to the gym every day and try to still get a little stronger.”

Sparks registered a squat of 462 pounds and a deadlift of 518 pounds. Both were Canadian and world records. There were 150 competitors at the event, 70 of which were women.

“In the past year there has been a huge increase in the number of women that are competing in powerlifting, which is very nice to see,” said Sparks.

Sparks will be competing in the Canadian Championships on Aug. 18-19 in Medicine Hat. Plans are in the works for a powerlifting competition in September.