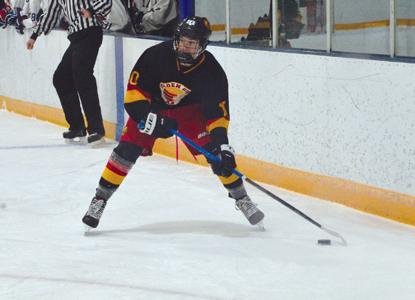 Taber bantam “AA” Golden Suns (2-7-4) had the full spectrum of results in its busy weekend of South Central Alberta Hockey League play with a trio of games.

The Golden Suns started things off by being blanked 4-0 by Lethbridge Hurricanes (4-6-2) at the Taber Arena on Friday night.

The team managed to bounce back with a 4-1 victory over Foothills Bisons (3-8-1) on the road on Saturday.

Connor Chapman powered the Suns with a hat trick and Riley Preachuk potted a single.

Keegan Stenger earned the victory in net, stopping 22 of 23 shots.

The Golden Suns finished off the trio of results by skating to a 5-5 draw with Medicine Hat Hounds (2-6-3) as the team returned to the Taber Arena on Sunday afternoon.

Heath Hansen potted a hat trick and Chapman and Fujita had singles.

Wright earned the tie in net, facing 32 shots on goal.

The first was a 7-5 victory over Chestermere Lakers (2-8-1) at the Taber Arena on Saturday.

Cage Smith went off for four goals, and Kayden Yeaman, Jager Gugyelka and Colby Gulliver each had singles. Yeaman also had three assists.

The team recorded an identical 7-5 win against Wheatland Braves (7-2-0) on the road on Sunday.

Nathan Planger had the hat trick and Smith, Sutten Emelson, Yeaman and Gulliver had singles. Gugyelka had three assists. Brylin Noble earned the win in net, facing 20 shots on goal.

The team also hosts Airdrie Lightning White at the Taber Arena on Sunday at 1 p.m.