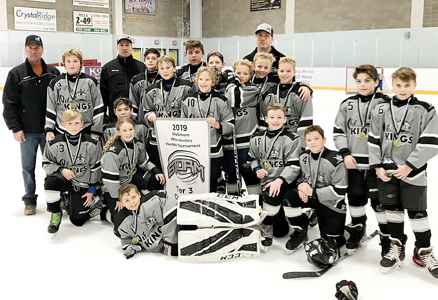 TEAM SUPREME: Taber peewee Oil Kings skated to a tournament championship in Strathmore, being able to turn the tables on the Red Deer Chiefs in the final game. TIMES PHOTO SUBMITTED BY CATHERINE KERKHOFF

Oil Kings kicked off its successful tournament run with a 10-4 victory over St. Albert Thunder on Friday.

Earlier, the Oil Kings did stumble against the Chiefs 3-2 on Saturday.

Langhofer-Krahn and Stronge scored for the Oil Kings.

ATOM: Taber atom ‘B’ Oil Kings finished as silver medalists at the Charmont Memorial Tournament this past weekend in Drumheller.

The team went undefeated in round-robin play before eventually falling to the host Drumheller Raptors in the championship game, 10-3.

Hyland scored twice and James Ruggles and Nathan Gensorek each once.

The Oil Kings did manage to beat the Raptors 7-4 earlier.

Badura had the hat trick and James Ruggles had two goals and two assists. Gensorek scored twice and Skylar Jensen and Jenner Workman each once.