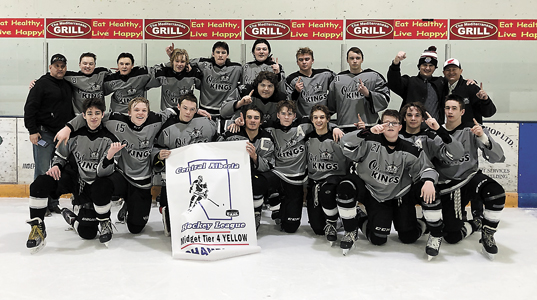 There is an old sports cliche that says it’s not about how you start, but how you finish.

And the Taber midget Oil Kings hockey team were the very definition of finishing strong on the way to its Tier IV Central Alberta Hockey League championship to cap off its minor hockey season earlier this month.

At the beginning of the season in its tiering rounds, the midget Oil Kings had a tough time of it.

“We came out of the blocks really, really bad. The first few games, a lot of people were on holidays and we had only eight players and we got smoked really bad the first two games,” said Brian Fabbri, head coach of the Taber midget Oil Kings. “I think Redcliff had 80-some shots. It did not look good coming out of the gates and with a bunch of new players, we didn’t have a very old team. We only had two players that were third-year midget. We had a lot of first years. It was a mixture of kids of all different talents, sizes and capabilities.”

Nevertheless, as the season progressed, so did the team’s results which saw the Oil Kings coming together and peaking at the ‘right’ time.

“With the kids’ work and determination, and their ability to listen and improve, they really tried the things we worked on in practices,” said Fabbri. “I have to say, the kids improved so much, every single one of them. The number-one reason was we let them have fun. It was their team, the captain led the team, I as a coach was simply guiding a ship making sure they didn’t crash on the shores,” continued Fabbri with a chuckle.

The Oil Kings’ ship made its way to the two-round playoff, having got a bye in the first round after finishing second in the tier thanks to the final game and one fair-play point.

Emerging from the bye, the Oil kings beat Bassano in the next round before squaring off against familiar foe Brooks.

Brooks was the top seed, but the Oil Kings had their number nevertheless.

“Brooks never lost a game all season except to us. These kids were hell bent for leather to beat Brooks,” said Fabbri. “They always wanted to beat the top team with that underdog mentality.”

And the Oil Kings did just that, including the championship final where the Oil Kings emerged victorious in two straight in the best-of-three series.

“We deployed a few different strategies and the kids followed it to a T. It was close and hard fought and we came out on top,” said Fabbri. “I would say they were probably a more skilled team, but our boys matched up, marked up and kept up with their top guys. They had two players on their team that were exceptionally good and we shadowed them really well and got under their skin.”

The result was a 6-3 doubling in the first game in Brooks where the Oil Kings got scoring from all over.

“We beat them with our hard work and our determination,” said Fabbri.

The Oil Kings were able to celebrate its banner win at home with a deciding 4-2 victory at the Taber Arena in early March, to sweep the best-of-three series in two straight. Gideon Tams tallied twice and Simon Virostek and McClelland had singles.

Vauxhallite Cole McClelland was the captain on the team as a third-year midget player.

“He (McClelland), was very vocal and the kids looked up to him. He did as much talking in the dressing room as I did. In fact, I didn’t do much talking, he was a real leader on the team,” said Fabbri.

Fabbri added the kids on the Oil Kings saw their rough start to the season as a challenge to work on and was aided by a supportive parent group.

“You know hockey. There were no issues, no problems. Everyone helped out and everyone volunteered. There was not one negative issue with the parents. They loved the season,” said Fabbri. “With the kids, it was a self-led team. I just kept them in check to make sure they didn’t get too crazy or too out of hand. Other than that, I let them lead and roll with it.”