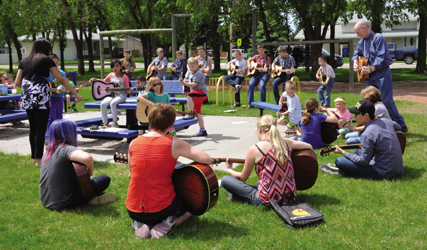 Gwen Thomas may be older then your average student, but that didn’t deter her from taking guitar lessons at L.T. Westlake Fine Arts Elementary school.

Thomas first started learning how to play the guitar in January. Her daughter, Janna Kunz, teaches a beginner guitar class at the school, and her granddaughter, Alera, goes to school there, so she was over at the school quite often, and was asked to write an article about the school by Quirk magazine in Lethbridge. She began talking a lot with the principal and advance guitar teacher, Murray Brown, and he suggested that she take lessons.

“I said to him, ‘Well how did you know that it was on my bucket list?’ And so, he said ‘Yeah, you could use a guitar here’, and so I started in my daughter’s class,” said Thomas. “It was so hard, because I thought that it would be like learning a piano and it was nothing (like it). It was two totally different planets.”

While she had wanted to learn how to play, she never thought about taking lessons. But when Brown suggested it, she saw it as a “divine intervention” and took a chance. Thomas got a guitar off of a friend’s son, and began attending lessons.

Since she started, Thomas has moved on from her beginner class to the new advanced class, through she says she has plenty of work to do to catch up with the other aspiring guitarists.

“My attention span was a little bit longer than the Grade 1s,” said Thomas on her move. “(The advanced class) is so much more ahead of where I’m at. But it’s just fun because I’ve just learned my cords, but playing them fast is a whole other story. But the kids don’t care, they just play, and I’m four cords behind them, but nobody cares, its just fun, so I’m learning in that kind of environment.”

She’s not just taking lessons with elementary students; there are some parents there as well. The lessons are free and open to anyone who is interested, including those who attend other schools or have already graduated, and can lend hopeful players a guitar if they don’t have any.

“It’s amazing, ‘cause with my daughter, she didn’t play guitar, and that’s how she started. At the school here, that’s how she learned, and now she’s the beginning teacher.”

“Some people have a hard time getting a guitar here; if you ride a bus of course, your guitar is too big to take on the bus, so we’re happy to do that,” said Brown. “I encourage a parent too, who are starting out, to borrow a guitar until you see if your child is into it or not, otherwise you’re going to have a guitar that collects dust in the closet for the next ten years.”

Thomas had played piano as a child, so she is familiar with playing different notes and reading music. She also enjoys signing, and has an ear for pitch.

But with guitar cords, she found it challenging, as you have to kind of know the song you’re playing, as cords don’t take you up or down like individual notes do.

“You can’t get any of that from guitar, you almost have to have that innate ability for (pitch),” said Thomas. “It would be very hard to learn a song by just playing the cords on a guitar… The cords don’t take you to the notes.”

“It’s cording guitar, or what I call what I call ‘campfire’ guitar,” said Brown. “It’s very basics of the major cords, we don’t get into reading music or music theory. It’s just the idea is to start playing some songs as soon as possible, especially with the summer months coming on us.”

That doesn’t make it any less fun though. Thomas can sing along as she plays, and doesn’t worry about others watching when she plays with her fellow students.

She credits the learning environment for her enjoyment of her lessons. As she lives by the school, she interacts with the students and staff quite frequently, making taking lessons there “right up my alley”.

“My goal is to enjoy doing this in the moment,” said Thomas. “Having this unique opportunity to learn guitar with the students at the school is another way that brings ‘harmony’ to me with who I am, and doing it in an environment of how I like to learn and enjoy… I couldn’t find a better place to be learning guitar.”

Guitar lessons at the school started three years ago, when the school began rebranding itself as a fine arts school. It takes place on Friday during the school year at noon, and no commitment is necessary to join.

Lessons are over for the school year, but will start up again at the end of September.