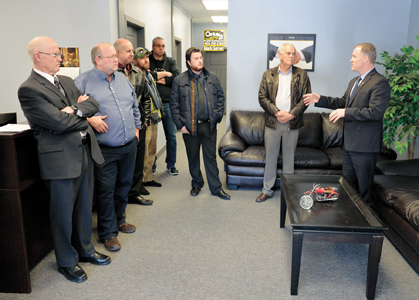 With new boundary changes coming into effect before the 2019 provincial election, current Cardston-Taber-Warner MLA Grant Hunter has announced his intention to seek the UCP nomination for the region’s new electoral division, Taber-Warner.

Speaking before a small crowd of supporters on Monday afternoon inside a realtor’s office on 48th Avenue, Hunter detailed some of the difficulties that surrounded the decision, including initially parachuting himself into a new riding that he doesn’t currently reside in.

“There’s a couple of issues at stake here. I don’t live in the new Taber-Warner riding, I live in Cardston. It was a difficult decision for me to make in that I would have to move my family. I’ve lived in Cardston for the past 11 years, so I know people on a very personal level there, but I realized that a couple of things have happened. First of all, the NDP have put us in a bad position in this southern part here, in that when the boundaries were redrawn, they split Cardston-Taber-Warner into two different ridings. They got rid of Little Bow, that means that Dave Schneider, who is the current MLA for Little Bow, no longer has a riding.”

The Old Man and South Saskatchewan Rivers form the northern boundary. Cardston-Siksika forms a tall, hourglass-shaped riding stretching north and south of the city of Lethbridge. Its boundaries extend all the way from the U.S. border to a section of the Trans-Canada Highway.

Now approved in the legislature, Cardston and Magrath will now share an MLA with Coalhurst, Picture Butte and Vauxhall along with communities in Vulcan County and the Siksika First Nation.

Hunter, who has represented Cardston-Taber-Warner since May 2015, expressed admiration for the economic drive and entrepreneurial spirit that have made Taber a success in the past.

“I feel comfortable with this because Taber is a really entrepreneurial place. There’s a lot of excitement going on in Taber, and I come from an entrepreneurial background. Before I became a dreaded politician, I was in business, and as a businessman, I realized the importance and the value of how money flows. Taking a look at what happens here in Taber, I realized that we’ve got a lot of entrepreneurs here, and we’ve got a lot of exciting things happening here in Taber. Highway 3 is a fantastic route, we need to twin that highway — but there’s going to be a lot of growth here in this area, and I look forward to being a part of helping that growth happen.”

Just back from a trip to southeast Asia, Hunter compared the devastating 2004 tsunami to the election of the NDP in Alberta in 2015.

Viewing the NDP’s majority victory as a backlash against decades of PC mismanagement, Hunter disputed this characterization, suggesting many of the previous conservative government’s policies were fundamentally sound.

“I can say in terms of outcomes that the Alberta that I grew up in was good to my family. There was opportunity here, there was work here, and people came from all over — not just Canada, but all over the world — they came here because there was opportunities here. We have to get back to that. There’s a winning formula called the Alberta Advantage. The Alberta Advantage is lower marginal tax rates, small government so it doesn’t cost the people lots of taxes, and a smaller regulatory burden. That in economic terms is called Reaganomics. So we didn’t actually come up with that formula, it’s been used in other jurisdictions under Margaret Thatcher, under Ronald Reagan, and we just tweaked it and put it here. We need to get back to that formula, because I don’t think that conservatives actually come up with these grand slam ideas. They say what has worked, how can we tweak it to make it a little better, and that’s what conservatives do very well. This is what we need to get back to, and this is what I pledge to do if you give me your support as the new MLA for the Taber-Warner riding.”

While there is currently no UCP constituency organization in place for Taber-Warner, Hunter expects these details to be worked out over the course of 2018.

“That won’t happen probably until after the founding convention which is in May. They’re being mum on that one, I don’t know when that’s going to be. But we’re a little over a year away from the next election, it’s going to have to happen in this year.”

Although not right away, Hunter confirmed that he plans to relocate to Taber-Warner once his children have finished high school.

“When we sat down and talked, I believe that it’s important that you live in the riding that you represent. However, my wife and I still have two kids at home and they’re still in high school, so when I sat down with Jason Kenney and Dave Schneider, I said I don’t want to pull them out of high school, it’s just too disruptive at this point, can we wait until after they’re finished high school before I move over here. Jason was fine with that, I hope that the constituents here in Taber-Warner riding will be as well.”

Stepping back into politics in an insider role, former mayor Henk DeVlieger announced he would be taking on the position of Hunter’s campaign manager in the upcoming nomination race.

“I don’t think you could pick a better person than Henk,” said Hunter. “I know he’s an absolute hard worker. There’s three things I know about Henk — he loves God, he loves his family, and he loves his community. And I noticed that quite quickly right from the beginning.”

DeVlieger praised Hunter’s efforts on behalf of the town which he witnessed during his term in office as the community’s top elected official.

“Grant is an energetic person, very dedicated, very honest, and Grant has shown over the last while that he is quite involved in the legislature, he is not afraid to speak up and make his case. Grant also studies something before he opens his mouth — especially in the legislature — he does a lot of background information. During the mayorship, I noticed, too, that whenever I came with a request to Grant I would get an answer right away, and if I didn’t, he would refer me to somebody else. Also then in the background he would stay involved, follow up. I think Grant did a lot of good things in the background for the Town of Taber.”