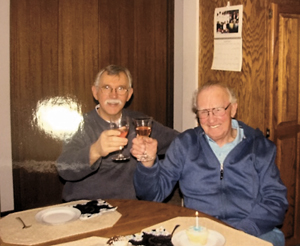 FAMILY FRIEND: The warmth Brother Baudoin gave by his presence at St. Mary’s School not only made him a teacher, but close friends as well to many who viewed him as part of their extended family. TIMES PHOTO SUBMITTED BY ALLEN HERBST

There were very few people who had the overall influence on Catholic education as Brother Baudoin did in the history of St. Mary’s School.

That fact was made abundantly clear in the outpouring of grief and support upon news of Baudoin’s passing in the Netherlands due to complications shortly after surgery last week.

St. Mary’s School has its gymnasium named after the man who was often found in that place encouraging students when he was not teaching math or religion.

Kevin Leahy was one of the athletes Brother Baudoin coached as Leahy got to see his influence in both the classroom and the gymnasium, playing basketball, volleyball and badminton.

“He was such a neat guy. My first class was in Grade 7 at St. Mary’s and I came from Kinniburgh School. boy, did he let me know how farm kids didn’t get the same education as town kids,” said Leahy with a chuckle. “He made you do your best and his teaching tactics were far different than they are now, you probably couldn’t get away today with what you did back then. He went from being your math teacher to being your basketball, volleyball or badminton coach, to being your friend and driving you to the hockey rink afterwards. It was a full circle the way he lived his life.”

As a coach, Brother Baudoin was an old-school coach who stressed sound fundamentals in playing a student’s sport of choice the right way.

“He was a teacher of the sport and a promoter of whatever sport he was coaching,” said Leahy. “He taught extremely good skills with everyone who went through with him. I almost thought of him as a teacher of sport rather than a coach of sport. Kids that played under him, they knew they weren’t necessarily going to see the floor, but you were still expected to perform at practice and we all did.”

As Leahy transitioned from player to coach, Baudoin’s influence was still there to draw wisdom and inspiration from.

“When I was coaching, he’d still give you little bits of advice when he came to watch a game once in awhile in how to handle this situation or that situation,” said Leahy. “He mentored his whole life.”

Not only known for this work in the classroom and the gymnasium, Brother Baudoin cared for his students like few others.

Joan Paradee recalled the profound influence the man had on her younger sister Celeste Krause back in Grade 10 in 1976 when she was diagnosed with inoperable brain cancer.

Her treatment was eight weeks of radiation, five days a week in Calgary.

She was not allowed to come home to Taber on weekends because of her headaches.

Not wanting to have her feel isolated from her friends in this time of need, Brother Baudoin would load up his car with Celeste’s friends (before there were seatbelt rules), and off to the Calgary General Hospital they would go for visiting on either Saturday or Sunday.

Brother Baudoin would also bring her some school work to do and bring back the previous week’s work to the school.

“She was always so grateful for his efforts to bring her buddies to see her as was family. He is forever in our hearts,” said Paradee. “He was always smiling and always very friendly calling everyone by their name. I can’t imagine how many students he taught, but until his last dying breath he could tell you the name of every last one of them.”

Celeste’s biggest worry was not being able to graduate with her friends.

“His reply was ‘don’t worry, I’ll be sure she does.’ And she did,” said Paradee. “Unfortunately, the cancer returned and we lost her at age 23. I know she’ll be so glad to see him again.”

Baudoin related to his students like few teachers could, where even topics like death were handled with grace as Baudoin formed bonds with his students.

“He was such a realist too. He wasn’t afraid to talk to students about death. At the time, one of our classmates had an older brother pass away in a farm accident. I still remember the conversation he had with us. It was very frank and to the point with death being part of living,” said Leahy. “The conversation is still with me today. His faith entered his life daily. It’s little things you would do around the school and he’d explain why that’s right or wrong. He could relate it in a faith or religious manner, or a ‘just don’t be a dumbass’ manner.”

Connecting with students, Brother Baudoin also connected with his co-workers who were also treated like family.

Allen Herbst taught chemistry/physics/outdoor ed alongside Brother Baudoin’s subjects for many years, starting in 1972 until the mid 1990s. In Brother Baudoin’s retirement, he stayed in the Taber community until he turned 80 when he moved back home to the Netherlands.

“His presence alone was total unselfishness with respect to his talents and his willingness to devote time after school to athletics in particular. He didn’t just make friends with the kids, he made friendships with the families. He was also very involved in his church community,” said Herbst.

The Herbst family was one of those families whose bond went past the classroom.

For close to 40 years, Brother Baudoin would make his way to the Herbst household for a weekly supper, drinks and games.

“He’d come here at 5 o’clock right on the bell as a family friend. My grandkids would call him ‘Uncle Bro’. He was just a member of the family and included in pretty much all we did. Even when our children left home and went to university, got married and raising families, every time they were home, Brother Baudoin was part of the visit,” said Herbst.

In the Times’ interview with Herbst, it marked the day of what would have been Brother Baudoin’s 86th birthday. Had he been in Taber, it would have been celebrated at the Herbst household like so many years previously.

“He would be at this house and we would be doing our normal routine. He’d arrive at 5 o’clock, we have a cribbage game and Linda would be getting supper ready and we’d have a beer. After supper, do clean up and the three of us would do a card game which was beautiful for three people called 9-5-2. It was a game we really enjoyed,” said Herbst. “Then pretty much like clockwork, he’d head home around 8 p.m. never wanting to over stay his welcome. When the girls were home, he’d help them with their homework. He was just part of the family, like an uncle to my kids. We were very, very close.”

Not having a family to care for himself, Brother Baudoin used every single extra free moment for the betterment of the places around him, making many friendships and giving back to St. Mary’s School and the community itself.

“He’d devote his time to his community, whether it was for the town of Taber at large with things like the food bank, he’d show up at places at it would go on and on with his volunteerism helping out everywhere,” said Herbst.

Herbst is sad that Brother Baudoin cannot be afforded a fully-packed memorial service for him given the COVID-19 pandemic that has different nations practising social distancing.

Nevertheless, Herbst got together with his daughters in Calgary on FaceTime, having their own little memorial service for a man that had so much impact on their lives.

“It was not in the fashion we would have liked, but once this COVID nonsense settles down, there will probably be something in our parish community as a memorial service to him,” said Herbst.