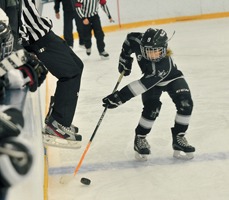 Minor hockey action saw both novice teams compete against each other on Saturday at the Taber Arena with Novice 2 Oil Kings beating Novice 1 Oil Kings 8-5.

ATOM: Taber Atom ‘A’ Oil Kings dropped both of its games over the weekend.

The first was a 9-5 loss to Airdrie on Saturday.

Connor Eldridge and Carter Jensen both had two goals apiece and Kade Duell notched a single. Duell also had two assists with Hunter Damberger and Kyler Marchuk getting single helpers.

The team was then edged 8-7 by Okotoks.

Duell potted the hat trick to go with an assist. Matthew Gensorek had two goals and two assists and Eldridge had a goal and an assist. Heath Hansen had one goal. Damberger, Marchuk, Walker Skiba, Callie McCulloch and Connor Chapman each had single assists.

Atom ‘B’ Oil Kings were also in action at a tournament this past weekend in Lethbridge where the squad recorded a 2-2 record.

The two losses involved 3-0 defeats at the hands of Red Deer and Lethbridge Swat respectively.

A Saturday victory involved an 8-4 doubling of Lethbridge Gators.

The team’s other victory was an 11-4 win over Medicine Hat on Sunday.

Span and Makarchuk each had hat tricks. Rabusic had two goals and Love, Coutts, and Lukacs had singles.

Holland, Makarchuk, Span and Evan Friesen all had assists.

INITIATION: Both Taber initiation hockey teams played each other on Saturday at the Taber Arena, with Taber 2 beating Taber 1 by a score of 13-11.

Scoring for Taber 2 were Lincoln Wiebe, Ethan Volk, Nixen Miller and Madix Miller all putting up hat tricks. Burke Hyland had a single.