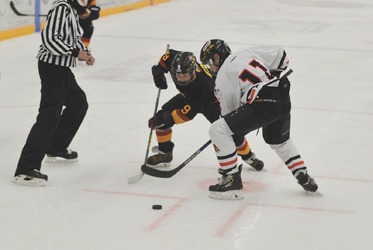 The squad dropped a 3-1 decision on the road on Friday night in the first game of its home-and-home series with Wheatland Braves (20-7-3).
Carson Cleland scored the lone Suns tally, with assists from Nolan Price and Nathan Verloop.

Brenden Olson faced 36 shots on net in the loss in goal.
Taber peewee “AA” Golden Suns managed to salvage a 3-3 tie with the Braves in the return trip home to the Taber Arena on Sunday afternoon, with two of the three Suns tallies coming from the power play.

Nolan Price scored twice and Colby Garner had a single.

Olson got the tie in net, facing 33 shots on goal.

Taber peewee “AA” Golden Suns are on the road on Feb. 20 with a game against Red Deer Parkland.

The team returns home on Feb. 21 with a 1 p.m. game against Central Selects at the Taber Arena.

The team beat Olds Grizzlys (19-4-6) 5-1 at the Taber Arena on Friday night, spreading the scoring around to five different skaters.

Peters earned the win in net, facing 27 shots on goal.

The team continued on to skate to a 3-3 draw at home against the Red Deer Steel Kings (5-19-6) on Saturday.

Taber bantam “AA” Golden Suns are on the road this weekend with a game against Red Deer Steel Kings on Saturday and a Sunday contest against Central Selects.

MIDGET: Taber midget “AA” Golden Suns proved road warriors, winning both of its games over the weekend in SCAHL play.

The first was a 5-1 victory over Okotoks Oilers Black on Saturday night.

Broc Merkl was stellar in net, facing 41 shots on goal to earn the win.
Sunday’s tilt featured a 7-6 victory over CRAA Blue.

Brant Mack potted the hat trick and Kiss, Middleton, Langridge and Scott Loewen all had singles.

Seth Graham earned the win in net with Graham and Merkl sharing goaltending duties, facing a total of 31 shots on goal.