Recreation board votes against show and shine relocation 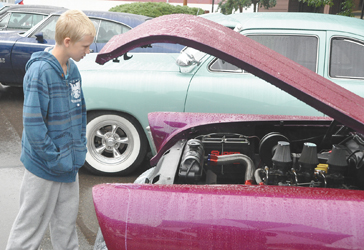 A proposal by the Taber Corn Country Cruisers to relocate the annual Cornfest Show and Shine from the downtown to the Confederation Park Ball Diamonds has been shot down over concerns about potential damages to the field surface.

At the May 5 meeting of the Taber Recreation Board, Bud MacMurchy, a representative of the Taber Corn Country Cruisers, submitted a request to relocate the vehicle show and shine held during Cornfest.

“This started a couple of years ago when we had an issue with a main street business, when we opted to move the show, and we did,” said MacMurchy. “The idea of this came up at the time, to go over what we’re proposing. It never developed, because a few years ago somebody had the idea back then of trying a slo-pitch tournament, so we never even brought it up.”

Reasons for the move put forward by the club included easier access to the event from the Cornfest grounds for patrons, enhanced safety taking patrons off the roadway, closer access for car owners to the grounds, more shaded areas available, clean-up confined to one area, no requirements for barricades, re-directed traffic eliminating concerns for the Fun Run, allowing for more parking, less dust in a grassed area and easier on infirm pedestrians, as well as less walking for patrons.

“All our pros considered, we’re down there at 6 a.m. We’re setting up barricades. We totally walk and clean all the streets we use,” said MacMurchy. “We wouldn’t require the 30 barricades from the Town of Taber that we use to block all the streets and the alleys. We also would not need — and we do it every year, and there’s a good reason why — we don’t need the Taber town police to come by and run all the license plates, and then contact the owners if they might want to move their vehicles before the crowds and the cars show up. We’d also avoid the Fun Run — we’ve had problems in the past, hot days where cars sitting on the street have overheated waiting for them to clear. The potential is there for someone to hit a runner.”

Other positives identified by the club included eliminating the need for the Taber Police Service to notify drivers who have left vehicles in the downtown overnight on Friday in the car show area, allowing for more and better parking for Cornfest patrons on 49th Avenue, eliminating the need for temporary washroom facilities (port-a-potties), and bringing the car show to a centralized location.

“Overall, we feel we could make the show safer to the general public without the crowds on the public streets,” said MacMurchy. “There would be easier access to the event grounds for Cornfest patrons. It would allow for more and better parking for all of our Cornfest visitors by moving it off the street from what we are presently using. And it will allow us more cars to be in the show.”

Potential concerns for administration and the rec board included damages to irrigation heads, the need to split and peel back permanent fencing to allow for a walkway, the need for a second gate access required by the Fire Code, damages to the field area, possibility of oil or gas leakage on outfield surfaces, safety concerns regarding vehicle traffic during the skatepark competition, and combustion from cigarettes or exhaust igniting unbagged grass residue.

“My biggest concern is damage to the field, because you can say what you want, but all that we’d need is one of the vehicles leaking something onto that field,” said rec board chair Luke Wijna. “All of a sudden there’s a cost that has to be paid for by someone, be it the associations, you guys — and we have a ball tournament the next day. And fireworks that need wet grass.”

Another stumbling block put forward by administration was with regard to the opening and closing of fence lines, a more difficult prospect, considering time restrictions for the ball tournament occurring the following day, as well as concerns regarding its safe re-assembly for that tournament.

“I knew that I wanted to make sure that ball is going to be safe,” continued Wijna. “That’s the big thing for me, that we can play ball — because it’s a sports field, not a parking lot. I want to see it as a safe place to play.”

Also in attendance to provide feedback at the request of rec board chair Luke Wijna were Cornfest Committee chair Tom Paterson and Angels in the Outfield Ball Tournament organizer Scott Takaguchi.

“Our main concern — with wet grass we understand thats due to fireworks — is how many vehicles are going to be out in the outfield, there could be a lot of ruts, it does soften up the ground,” said Takaguchi. “The main concern that we have is safety for our players that are going to play out there on Sunday. If there’s ruts, as they’re running across, it’s like running over holes. If they’re tripping and falling, it could cause some issues on our insurance side. We have to make sure that we have safe facilities for our players to be able to play on. If there are ruts out there in the field, we’re going to have to repair them before we even can use them.”

From the perspective of a Cornfest organizer, Paterson was more amenable to the idea, as it could reduce parking congestion.

According to administration, upon researching other communities and their practices, it was found that some communities allow this type of event on their ball diamonds, but that many have discontinued the practice due to risks associated with potential damage. Administration did note that it is quite common to host these events on park or green spaces, which are less impacted if damaged than a ball diamond.

Concerns over fencing removal, access and egress due to Fire Code requirements, and the proposal of potentially using snow fencing as a temporary solution for a next-day ball tournament were discussed by the board.

There are no funds allocated in the 2016 budget for construction of access gates, as required by the Alberta Fire Code. If the request were approved, the fencing requirements would be a contracted service. Staff resources would be required to monitor irrigation lines and heads, watering of fields, and ensuring access provisions for emergency vehicles are met.

“The Fire Code states that when you put vehicles in an area like that, it becomes a storage area, so as per the Fire Code, they need sixty metres of access and egress. So two on each field in order to meet Fire Code,” said recreation director Aline Holmen.

Cost involved in any fence removal and replacement is also a factor, according to Coun. Randy Sparks, who serves as one of two town council representatives on the rec board.

“There’s a fire code that has to be followed regardless. I cannot support splitting the fence in any shape or form, and then having to re-roll it, and having problems with the tightening, especially with a ball tournament the next day. Just to get that repaired with fences and gates is $9,050 and some change. I don’t think the town should be on the hook for that. I understand why they’re asking it, because what better place than at the ball diamonds? It’s right there with nice grass to walk on, it’s easy access for Cornfest. But to me there’s too many issues.”

On April 4, CAO Greg Birch, fire chief Steve Munshaw, recreation manager Trent Smith, and recreation director Aline Holmen, met with MacMurchy at the ball diamonds to discuss the proposal. According to administration, the membership of the car club has since voted in favour of the potential switch in venue.

“I have to say I really like this last point,” said Mills. “That the participants can experience Cornfest as it would be visible right there in front of them. I do feel that a lot of people come just for the car show sometimes, and also for the vendors. I like that idea of getting everything right there.”

In a counterpoint, Wijna suggested that downtown businesses might have a darker view of moving the Cornfest car show out of the street area.

“I’m sure if I went and talked to the bars and the Legion they’d think another way about it. All of a sudden you’re taking all the business that these fellas bring in — I’m not knocking it at all — I’m just saying that there’s a lot of people that got nailed on the head five or six years ago, and to me it was an absolute disgrace that it happened when they couldn’t come all the way across. It’s a good deal for the businesses downtown also.”

Following an escalating back and forth exchange over the proposal between MacMurchy and Wijna, where the presenter and chair appeared to reach an impasse regarding opposing opinions, Sparks was heard to utter some parting words when MacMurchy was exiting the gallery.

“That’s your biggest issue, people, is that smart alec right there.”

Board representative Danielle Hansen was also critical of the proposal, suggesting moving the car show would result in unwanted congestion, as well as stating her opinion that the club was seeking the move for their own convenience rather than that of Cornfest patrons.

“Cornfest is a full community project. It’s not just Confederation Park. And it seems like they really want to squish all into that area. Now with our spray park, our skateboard park, baseball, and having the amusement park there, having all of these vendors, and then shoving another 200 cars there? That just seems very unsafe, and a lot more congested than what it needs to be. The reason why they seem to want to move mainly is for their convenience, not the people that are actually going and walking around.”

“My only issue — and at times I hesitate to go further with this — this is an awesome idea, but it’s very hard for me to give my full support when we have a presenter that comes here and present to the rec board with a huge chip on his shoulder. I’m sorry — I have an issue with that, and that shouldn’t be happening. There’s not a person here that had their mind pre-made up before this meeting. We came here to listen to this group, to what they have to say, to hear why they wanted this, and if you come here with an attitude, I’m sorry it’s very hard to support.”

Following deliberations at their May 5 regular meeting, the Taber Recreation Board voted unanimously (6-0) to recommend town council deny the request of Bud MacMurchy and the Corn Country Cruisers to relocate the Taber Cornfest Car Show from 49th Avenue to the Confederation Park Ball Diamonds.